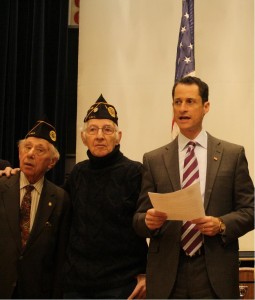 Queens, NY – Today at the Kew Forest Jewish War Veterans Post, Rep. Anthony Weiner (D – Queens and Brooklyn) announced that he will introduce legislation to establish a memorial at Arlington National Cemetery to honor Jewish chaplains who died while serving in the US Armed Forces.

Currently, Chaplains Hill at Arlington National Cemetery contains memorials to honor Protestant and Catholic chaplains who died serving their country – but it lacks a similar memorial to honor the 13 Jewish chaplains who gave their lives in World War II, the Korean War and Vietnam.

According to the U.S. Army, about 1,800 soldiers identified themselves as Jewish in 2009. Jewish chaplains have served honorably in the Armed Forces since 1862, and there are currently 32 rabbis on active duty.

Weiner was joined by representatives of various Jewish War Veterans groups from throughout Queens who support the project. According to the Jewish Chaplains Council, the organization has raised all the funds needed to construct the memorial.

Last year, Rep. Weiner sent a letter to his colleagues to introduce the resolution. 23 members of Congress signed on as co-sponsors in just two months. “These chaplains, including Rabbi Alexander P. Good, who was honored with the distinguished Chaplain’s Medal for Heroism for saving lives aboard the torpedoed USS Dorchester in WWII, deserve equal representation with their fellow chaplains in our nation’s most hallowed space,” Weiner wrote.

“These chaplains who served their country so honorably deserve this memorial, just like those of other faiths,” Weiner said. “I believe there will be strong support for this resolution in Congress and I look forward to the day when I can stand with my colleagues and see this memorial unveiled at Arlington National Cemetery.”