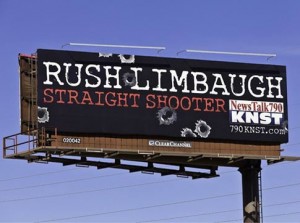 A radio station in Tucson has taken down a billboard for the Rush Limbaugh show that called Limbaugh a “straight shooter” and was riddled with images of bullet holes.

Clear Channel, the radio giant that owns KNST (790 AM), said the billboard had been up for weeks, but was now inappropriate in the wake of the Tucson shootings.

Clear Channel defended the use of what it called the “common” term “straight shooter,” and stressed that Limbaugh himself had nothing to do with the billboard – that it was done by the local station’s promotion department.

The Tucson shootings have sparked a wave of debate over whether the sometimes strident tone of talk radio contributed to an atmosphere of potential violence.

Limbaugh, among others, has ridiculed that notion, saying critics are using it as an excuse to attack conservative talk radio.

President Obama, in his Wednesday night address, seemed to reject the notion of a specific link to the shootings. But he called for a more civil tone to the national debate.

Specifically in this case, said Clear Channel, the company “quickly elected to take down this ad, believing that discussion of its interpretation would not contribute to the desire for healing in the Tucson community.”