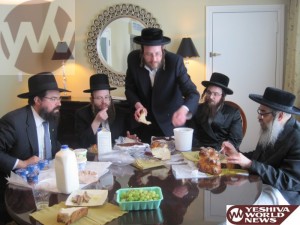 As is the custom of a snowy Baltimore morning, there was a plethora of closings that spanned the educational and business sectors. However, the business of chesed was fully operational, at all hours. One local businessman was about to go in to high gear for a very unusual occurrence, especially around these parts.

At approximately 7:30 AM, after long hours of chesed calls, an anonymous Baltimore businessman heard the voice mail alert tone on his cell while in line at the market. When he noticed the missed calls from the 718 and 845 area codes, numbers that appeared to be very familiar due to the scope of his business network, he immediately returned the calls. One call leads to the unraveling of a very troubling situation; The Satmar Rebbe, Rav Aron Teitelbaum Shlita, en route from Mexico to JFK, has been diverted to Dulles. This contact called Moshe* because he is the only one of his contacts that reside proximate to Dulles. At least his nerves have calmed knowing that he was about to, once again, be facilitating a chesed.

Moshe went to his Rebbe, Harav Yissochor Dov Eichenstein, who then assembled a group of baalei batim from Baltimore’s new mikdash m’at, Merkaz Torah U’Tefilah, who traveled down to Dulles airport. The Satmar Rebbe, who is in availus, needed a minyan and a proper meal. In no time at all, Rebbetzin Eichenstein prepared a feast fit for a Rebbe. With a Sefer Torah, Chalav Yisrael milk and enough chevra for a minyan, the travel to Dulles began.

The Satmar Rebbe’s plane landed at 8:34 AM, but the Rebbe and his entourage were prevented from disembarking because it was a continuing flight that can only open at the final destination, as per US law. Furthermore, the three hour tarmac rule did not apply because it was non US airline.

Fortuitously, Rav Eichenstein and his mispalillim had kefitzas haderech and arrived at 10:15. Simultaneously, Reb Levi Shem Tov, Chabad’s representative in Washington, was working with TSA, the Mexican Ambassador to the USA and others to have the airline open the doors for the Rebbe to disembark. These efforts did not suffice to open the doors of the plane and the Merkaz Torah U’Tefilah group sat tight in the international arriving parking areas.

Finally at 11:40 the flight was declared discontinued and all travelers could then alight. The Satmar Rebbe and his group were ushered through customs as VIPs and headed to the suite reserved at the Marriot Dulles where davening and breakfast would take place. The Rebbe showed tremendous hakaras hatov to Rav Eichenstein and all those involved in performing this valuable chesed. The Rebbe was quite impressed at the mesiras nefesh given for his personal situation and gave a bracha to the entire group.

While in the Washington areas the Rebbe visited various Mosdos HaTorah. All who were fortunate to be mishtataif in today’s unbelievable chesed gained tremendous chizuk.