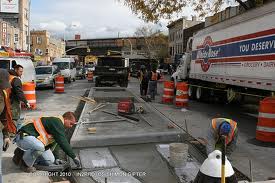 They had a sometimes-heated exchange of views concerning the problems created by the newly-constructed pedestrian islands on Fort Hamilton Parkway.

When traffic is delayed for any reason (truck deliveries, garbage collection, rush hour traffic), ambulances are unable to bypass the clogged traffic artery, as they used to do when the center lane was available for use by emergency vehicles.

Recognizing that he had now made the roadway too narrow for fire trucks (who need at least 50 feet to make their turns) Commissioner Palmieri—without any prior notice to the  community—eliminated 11 parking spaces at various corners to make more room for turns. These spaces he now designated “Fire Zones,” with $115.00 tickets issued to anyone who parks there—or even briefly stands there to load or unload.

This was a serious blow to the parking-starved community of BPW.

Customers, who cannot find a place to park locally, now travel elsewhere to shop. Local merchants have lost 15-20 percent of their business. Delivery trucks struggle to find a   legal place where their vehicles can stop to load and unload their merchandise.

After an hour of frank discussion, the City officials admitted they do not have the authority to  remove the islands, since they cost the City more than a million dollars to build. Only top NYC DOT Commissioner Janette Sadik-Kahn has that authority.

Commissioner Palmieri promised to arrange a meeting with Sadik-Khan.