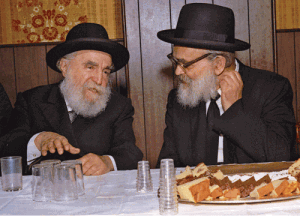 A unique gathering was held this past Motzei Shabbos in honor of the 25th yahrtzeit of Hagon Rav Yaakov Kamenetsky ZATZAL. Dozens of Rav Yaakov’s descendants converged in the Tel Arza section of Jerusalem. The event was attended by Rav Yaakov’s children, grandchildren, great children and even great-great grandchildren living in Eretz Yisrael.

The Melava Malka was chaired by Rav Yosef Kamenetsky, Rosh Kollel of Moscow, and a grandson of Rav Yaakov. Speakers included Rav Nosson Kamenetsky and Rav Hirsch Diskind, son and son-in-law of Rav Yaakov. They were followed by two grandsons, Rav Yitzchak Shurin, Rosh Yeshiva in Shappell’s, and Rav Avraham Kamentsky, a R”M in Yeshivas Beis Yisrael.  These two grandsons are considered the to have held the closest relationships with Rav Yaakov. They each riveted the assembled with some of their encounters with their great Zeide. Some of these incidents had never been previously revealed.

The event closed with the screening of a rare video of a drasha delivered by Rav Yaakov in 5743. May his memory be a merit for his family and for all of Klal Yisrael. 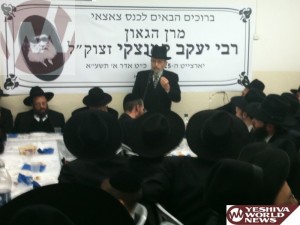