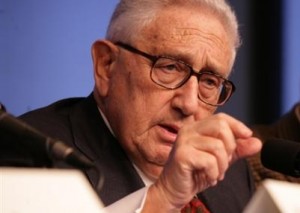 As the calls for clemency for Jonathan Pollard continue to intensify, Henry A. Kissinger, an elder statesman, well-respected diplomat, and experienced member of the United States intelligence community, has become the latest American governmental leader to issue a public call for Pollard’s release.  Pollard has spent more than 25 years languishing in a federal prison for passing classified information to Israel, an ally of the United States.

Kissinger, who served as United States Secretary of State and National Security Advisor under Presidents Richard Nixon and Gerald Ford, sent a letter to President Obama requesting that he commute Pollard’s sentence to time served (the full text of the letter appears below and a copy is attached).

In addition, Kissinger served as a member of the Commission on Integrated Long-Term Strategy of the National Security Council and Defense Department.  He is currently a member of the Defense Policy Board.

Kissinger served as Secretary of State from 1973-1977 and as National Security Advisor from 1969-1975.  In addition, Kissinger was awarded the Nobel Peace Prize in 1973, and was presented with the Presidential Medal of Freedom by President Ford in 1977.

“[H]aving talked with George Shultz and read the statements of former CIA Director Woolsey, former Senate Intelligence Committee Chairman DeConcini, former Defense Secretary Weinberger, former Attorney General Mukasey and others whose judgments and first-hand knowledge I respect, I find their unanimous support for clemency compelling,” wrote Kissinger in his letter to the President.  “I believe justice would be served by commuting the remainder of Pollard’s sentence of life imprisonment.”

Over the past several months, many prominent government officials, high-ranking individuals in the national intelligence arena, leading professionals in the legal world, and renowned religious and communal leaders have issued public calls for clemency for Pollard.

Jonathan Pollard has repeatedly expressed his remorse publicly and in private in letters to many Presidents and others.  His health has deteriorated significantly during his two-and-a-half decades in prison.

Pollard’s life sentence is grossly disproportionate when compared to the sentences of others who have spied for allied nations.  Despite the fact that Pollard entered into a plea agreement and fully cooperated with the prosecution in his case, he nonetheless received a life sentence and a recommendation that he never be paroled, which was in complete violation of the plea agreement he had reached with the government.

The following is the text of Henry Kissinger’s letter to President Obama:

I would have written this letter sooner but for a long trip abroad, from which I have just returned.  While I was gone, I gave much thought to the question of clemency for Jonathan Pollard.  At first I felt I did not have enough information to render a reasoned and just opinion.  But having talked with George Shultz and read the statements of former CIA Director Woolsey, former Senate Intelligence Committee Chairman DeConcini, former Defense Secretary Weinberger, former Attorney General Mukasey and others whose judgments and first-hand knowledge I respect, I find their unanimous support for clemency compelling.

I believe justice would be served by commuting the remainder of Pollard’s sentence of life imprisonment.

Respectfully yours,
Henry A. Kissinger