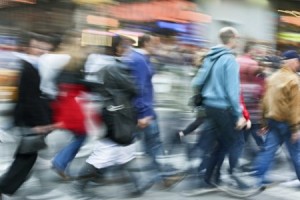 Data released today from the 2010 U.S. Census shows that the city’s population has reached 8.175 million – a record high.

However, the number is far below City Hall’s estimate of 8.4 million.

While Staten Island, Manhattan and the Bronx all showed significant gains, with Staten Island seeing the biggest percentage increase, Brooklyn and Queens had much smaller growth.

In fact, according to the Census, the population in Queens increased by just 1,300 people over the past 10 years.

“We don’t quite understand the numbers,” said Mayor Michael Bloomberg. “I mean, we have the borough president of Brooklyn here, who will tell you in Brooklyn it’s inconceivable the population’s not much bigger than it was 10 years ago. In Queens, common sense says we didn’t go up by 1,000 people. We went up much greater than that.”

Census Director Robert Grovers said he empathized with Bloomberg, but could not address his specific complaints.

Racial data was also released today, which showed that while the city’s Hispanic population grew by more than eight percent, the number of non-Hispanic blacks was down five percent – a decrease of about 100,000 people.

Numbers released in December showed the state’s total population rose over the past decade to about 19.5 million people.

Some upstate cities saw sharp population decline in the past 10 years. Buffalo’s population, according to the Census, fell 11 percent.

Although it’s taken only once every decade, the Census provides vital information for each of the 50 states. Population information is used by officials to redraw federal and state legislative voting districts, and determine how many representatives are sent to Washington, D.C.

Based on the new numbers, New York will be sending 27 representatives to the capitol – down from 29 – for its lowest level in more than 180 years.