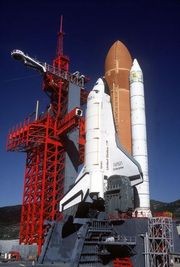 The Intrepid Sea-Air-Space Museum has landed a NASA space shuttle!

NASA Administrator Charles Bolden will announce later Tuesday that the prototype Enterprise shuttle has been awarded to the Intrepid, sources said.

The Enterprise shuttle was a test model that flew, but never orbited space.

The Intrepid Sea-Air-Space Museum on the Hudson’s Pier 86 was up against tough competition from 20 other cities and institutions, including the Smithsonian Institution in Washington, Kennedy Space Center in Florida and the Johnson Space Center in Houston.

But “as the cultural and economic capital of our nation, New York City has the right stuff to best exhibit the shuttle,” Gillibrand said.