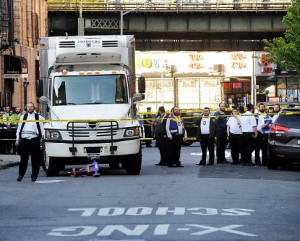 The New York State Senate today passed legislation that will require certain trucks to be equipped with a special convex mirror that helps improve visibility and reduces the risk of pedestrian accidents. The bill (S.3151), sponsored by Senator Martin Golden (R,C,I-Brooklyn), was requested by New York City Mayor Michael Bloomberg following a significant number of pedestrian deaths and injuries attributed to the inability of some truck drivers to see people passing in front of their vehicles.

“Trucks equipped with crossover mirrors eliminate the truck driver’s blind spot and allow drivers to see pedestrians crossing in front of them,” Senator Golden said. “I am proud to have introduced this important legislation that the state Senate has approved. I urge my colleagues in the state Assembly to now approve this bill, so that Governor Cuomo can sign it into law, and we can reduce pedestrian fatalities and injuries in New York. This is about saving lives and keeping New Yorkers safe on our streets.”

“Crowded city streets pose many navigation challenges for vehicles and pedestrians alike,” Senate Majority Leader Dean G. Skelos said. “Requiring the use of special mirrors known to increase visibility in the front of trucks is a simple step that will reduce the potential for death or injury and improve the safety of New York neighborhoods.”

The U.S. Department of Transportation’s National Highway Traffic Safety Administration’s 2009 Traffic Safety Facts reports that 66 percent of pedestrians killed by trucks weighing more than 10,000 pounds were initially impacted by the front of the truck. In New York City, there have been 161 fatal accidents and 2,732 injury accidents involving trucks and pedestrians between 1999 and 2008.

Earlier this month, four-year-old Moses Englender was among the city’s latest tragic victims, when he was killed by a truck while he was riding a tricycle in Williamsburg, Brooklyn. The driver apparently could not see the child in front of the truck.

The bill requires all trucks, tractors, and tractor-trailers or semi-trailer combinations registered in New York State with a maximum gross weight of 26,000 pounds or more and a conventional cab configuration, to be equipped with crossover mirrors when operating in New York City.

Crossover mirrors allow the driver to see any person at least three feet tall who passes at least one foot in front of their vehicles. While the exact cost depends on the type of mount used, the mirror heads themselves cost approximately $10 to $29 each and assembly kits which include the mirror head and the adjustable braces and mounting hardware are available for approximately $23 to $57 each.

The bill has been sent to the Assembly.