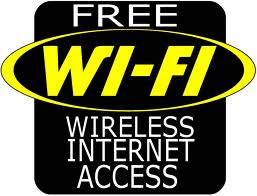 Mayor Michael R. Bloomberg frequently proclaims New York as an ideal city to start a technology company, but until now not a single neighborhood offered free wireless access to the Internet.

A narrow strip of that void will officially be filled on Thursday when the wraps come off Dumbo Wi-Fi, a network designed to be available outdoors between the Brooklyn and Manhattan Bridges. That the network, financed by a developer, is the only one of its kind in New York illustrates how far the city is from becoming truly connected.

So far, it has had a patchwork of wireless hot spots in parks and other public spaces, almost all of them arranged by business-improvement districts and sponsored by corporations.

At the end of June, one company, Towerstream, plans to introduce what it claims will be “the most robust and fastest portable Wi-Fi network” in Manhattan, though it will not technically be free: it hopes to sell access to cellphone service providers, who could then offer it to their customers. Wi-Fi generally provides a faster and stronger signal than cellphone networks.

In the Dumbo neighborhood, the improvement district teamed with Two Trees Management Company, which owns about a dozen buildings in the neighborhood. Two Trees spent about $65,000 to have antennas and other equipment installed by the nonprofit organization NYCwireless, which has placed hot spots in several places around the city.

“I’m very hopeful that this is the first of what will be a number of these types of projects,” said Dana Spiegel, the executive director of NYCwireless.

For the developer, “we see a whole bunch of benefits in terms of the growth trajectory of the neighborhood and the kinds of folks that are down here and that we want to attract here,” said Tucker Reed, the director of special projects for Two Trees.

“We’re encouraging area partnerships like the new one in Dumbo,” he said, “and we are directly engaging private sector partners to expand Wi-Fi service in city parks and public spaces.”