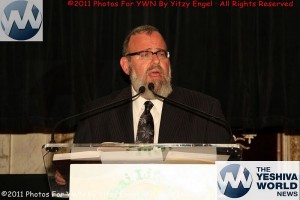 More than 900 men and women from the Five Towns/Rockaway area filled the White Shul, Congregation Kneseth Israel for a community symposium offering suggestions for helping families cope with the murder of Leiby Kletzky. The forum was the latest in a series organized by Chai Lifeline and co-sponsored by Interborough Developmental and Consultation Center, MASK, and Achiezer.

“The situation is unprecedented in the history of the American Jewish community,” noted Rabbi Simcha Scholar, Chai Lifeline’s executive vice president. “That this child was killed by someone in our community has magnified the trauma and caused parents to question everything they believe about how to keep their children safe.”

The evening began with divrei chizuk by Rabbi Eytan Feiner, Rav of the White Shul. He noted that the entire community had come together to find Leiby, and he urged the hundreds of participants not to lose that sense of unity.

His words of comfort, “We don’t know why this happened, but ultimately it is for the good,” were eagerly received. Men and women wiped tears from their eyes as Rabbi Feiner spoke.

Dr. Norman Blumenthal, a clinical psychologist and director of Chai Lifeline’s department of crisis intervention and bereavement, offered concrete advice for talking to children about Leiby’s death and other traumatic events.

“It’s unfortunate that we have to tell our children about things we would rather they didn’t know. But we live in a very public world, and it’s important that they get the facts from responsible adults,” he stated. He advised parents to follow up explanations with a clear statement that although scary things can happen, they are rare.

Reflecting on the suspect in Leiby’s death came from the Orthodox community, he said, “Unfortunately, we have to impress upon them that even people who look safe and look familiar may not be necessarily be safe. That’s a tragic sign of the times that we have to give this message over to them.”

David Pelcovitz, Ph.D., a renowned child psychologist and professor at Yeshiva University, also gave practical advice on giving children a sense of security in an ever-changing world. Among his suggestions were giving children undivided attention when they need support, and reinforcing rituals like tucking them into bed at night to show them that they are safe.

“Right now, they are scared, and that’s normal. But normality will return,” he said.

Rabbi Scholar noted that over 120,000 had participated in Chai Lifeline programs in the past week, either in person at the symposia, through live audio and video feeds of community forums, two conference calls with Dr. Blumenthal, and downloads of the feeds at www.chailifeline.org/boroparktragedy. An eight-minute video of Dr. Blumenthal’s suggestions on talking to children about the tragedy has been viewed more than 24,000 times on Youtube.com

“We feel privileged to be able to serve the community in this time of extreme stress,” said Rabbi Scholar.