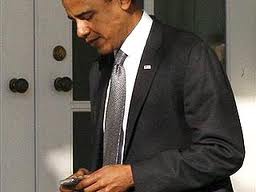 One day after the stock market took its biggest plunge since the 2008 financial crisis, President Obama on Tuesday canceled a previously scheduled speech at a local moving company, and the White House also pulled the plug on the daily press briefing.

Instead of traveling to Springfield, Va.-based Interstate Moving Services and making public remarks on fuel efficiency standards for work trucks, Mr. Obama will meet privately with industry officials at the White House this morning — and that meeting will be closed to the press, the White House announced in a scheduling update Tuesday morning.

In addition, a 12:30 briefing with press secretary Jay Carney has been canceled, the update said.

On Monday, the stock market suffered its worst blow since before the president took office, with the Dow Jones Industrial Average plummeting more than 630 points — losing more than 5 percent of its value and plunging below the 11,000 line. The turmoil came after ratings agency Standard & Poor’s late on Friday cut the country’s credit rating from AAA to AA-plus for the first time in U.S. history.

Mr. Obama addressed the downgrade in a brief speech Monday, but his remarks failed to calm the markets, which only continued their decline. In the address, he said S&P’s decision is a result of Washington gridlock and the lack of political will in the nation’s capital.