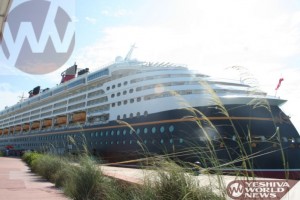 Two weeks ago, the Ohr Meir Foundation embarked on a brand new Disney adventure. The group of girls, ages 8-19, who have been in remission from cancer for at least six months, were spirited away for a spectacular Disney cruise. For four days they tasted the sweetness of a carefree childhood that had been taken from them when they were diagnosed. Together with Ohr Meir staff, they flew to Port Canaveral in Florida, where they boarded the Disney Wonder cruise ship for a trip they will relive and relish for a lifetime.

Aboard the ship, the girls enjoyed Glatt Kosher/Cholov Yisroel meals and exclusive VIP treatment. Ohr Meir’s special relationship with Disney during the past two decades assured a magical experience at sea. The children were entertained by the many thrills that only Disney can deliver: themed presentations, personal meet-and-greets with their favorite Disney characters, and magnificent Disney shows each evening.  The ship made two amazing stops along the way: first in Nassau, Bahamas and then in Castaway Cay. While in Nassau, the girls enjoyed a surprise visit to the world famous Atlantis resort- the recently built city of water wonder- and had a blast with a variety of rides and activities The second port of call was Castaway Cay, Disney’s private island, where the girls spent Tuesday enjoying a barbecue lunch while taking in the breathtaking beachfront views. There they were engaged in a host of different activities, including volleyball, biking, boating, swimming, and snorkeling with sting rays.

The “Ohr Meir Cruizers” were the talk of the Disney Wonder cruise ship, and their green shirts became synonymous with fun!  After all these kids went through, they knew how to celebrate life as no one else. To enable the families of these children to follow along every step of the way, Ohr Meir provided them with live detailed reports on their website www.ohrmeir.org and hundreds of pictures were uploaded throughout every day.

Two of the counselors on the trip were giving back the joy they got from Ohr Meir in years past. As children, they had cancer and they themselves were participants on an Ohr Meir Disney World Trip. The Ohr Meir Foundation has long been synonymous with Disney and making dreams come true; for seventeen years, they have been bringing sun-kissed smiles to those who need it most. Each year, they whisk away children with cancer for an all-expense-paid Disney World/Universal/SeaWorld adventure, a magical trip that is a colorful whirlwind of fun and surprise. This past December, forty-six children left behind their treatments and lengthy hospital stays to laugh their way through four spectacular days of memorable magic only Disney & the Orlando theme parks can provide.

Ari Scharf and Shmayie Friedman were the Ohr Meir coordinators of the cruise, both working diligently on the extensive planning and implementation to make sure the cruise would be the success it was. From the moment the idea for such a cruise was first conceived last year by Ari Scharf, the Ohr Meir team worked for months on fine tuning and perfecting every aspect of this trip.  When asked about the trip, Ari Scharf said “The Disney Cruise staff loved having our group aboard and smiled whenever they saw the Ohr Meir green shirts throughout the ship.” Ray Smale, Cruise Director for the Disney Wonder Cruise Ship, added “We had so much fun and can’t wait to have the Ohr Meir Cruisers again!”

Founded in 1993, The Ohr Meir Foundation is the brainchild of Ari and Idy Friedman, who lost their ten year old son Meir after a seven year battle with leukemia. In his memory, the Friedman family hoped to establish a foundation that would capture Meir’s indomitable spirit and infectious smile. The Ohr Meir Foundation has no overhead or administrative costs; every penny raised is spent to benefit the children and their families. Ohr Meir’s staff is comprised entirely of volunteers who generously donate their time and expertise.

Over 600 cancer patients have participated in Ohr Meir’s various Trips and Adventures during the past 17 years.

The annual Disney World Trips, Freedom Trips, and the newly added Disney Cruise trips are truly magical. With a low ratio of counselor to child, the children are free to be children again, without the cloud of worry that has become their daily companion. They find true friends in their fellow campers and forge lasting bonds with the entire staff of Ohr Meir, establishing an invaluable support system for the road ahead. The Friedman’s view this renewed energy as the greatest gift that the trip provides. “When we see the twinkle return to a child’s eye, we know that a reinvigorated spirit is more powerful than any medicine or treatment,” Ari Friedman says with quiet pride. “A bright smile is the greatest reward for our efforts.”