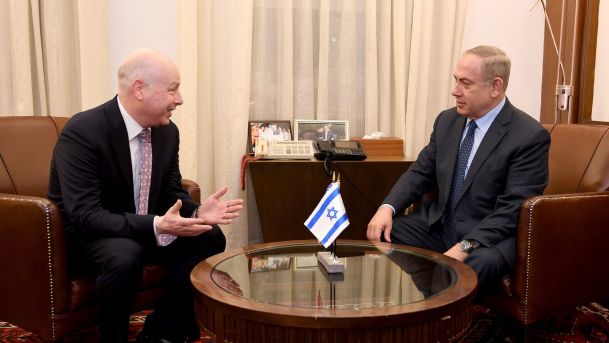 US Special Envoy Jason Greenblatt is back in Israel according to White House sources, once again hoping to advance the diplomatic progress between Israel and the PA (Palestinian Authority).

“While President Trump had productive meetings with Prime Minister Netanyahu and President Abbas at the United Nations, we always said that the UN would not focus on peace conversations and that those conversations would be happening on a separate track,” the official said in a statement.

It appears he hopes to conduct quiet diplomacy which he hopes will bringing the parties back to the negotiating table, which includes meetings in both Jerusalem and Ramallah. It is added that Greenblatt’s arrival signals successful meetings during the recent United Nations General Assembly between US President Donald Trump and PM Netanyahu and PA Chairman Mohammad Abbas.

Recently, Arab media published details claiming to be part of the Trump government’s peace initiative. According to the report, the issue of borders will be dealt with gradually and the issue of refugees will not be discussed at this stage. These steps have been supported by some of the moderate Arab states in the region, who are prepared to join the mediation process and work to persuade the Palestinians. According to this report, we are not talking about the 1967 borders, or even a plan close to this.

The Prime Minister told cabinet ministers during a meeting that President Trump’s people are working intensively to formulate an orderly plan to advance the process between Israel and the Palestinians. He said that during a meeting with President Trump, he heard a great willingness on the part of the administration to advance the matter expeditiously.

During the cabinet meeting, the ministers were asked to express their opinion on economic gestures to the Palestinians – and the general opinion was positive. These are mainly joint projects that the government wants to promote – and will take a long time to implement – not immediate steps on the ground.

Greenblatt’s arrival is one of the reasons for the postponement of the meeting of the Supreme Planning Council of the Civil Administration next week, on the eve of Sukkos. The council is supposed to approve thousands of housing units throughout Yehuda & Shomron – including construction for evacuees from Migron and the 300 units in Beit El.