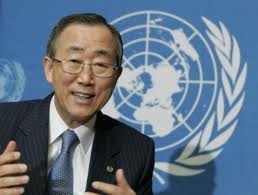 United Nations Secretary-General Bank ki-Moon, a man whose voice is rarely heard in the forefront of atrocities is usually among the first to release a statement against Israel. The General Assembly last week did not miss yet another opportunity to act contrary to Israel’s interests, and in this case, also over objections of the United States. This is why the PA (Palestinian Authority) took its observer nation status request to the General Assembly and not the Security Council, well-aware the US can exercise veto power in the former, not the latter.

With the recently announced Israeli decision to resume construction in Yerushalayim and the E1 area between French Hill and Maale Adumim, ki-Moon was quick to warn that doing so may deliver an “almost fatal blow” to the diplomatic process between Israel and the PA (Palestinian Authority).

Being that the United Nations views areas of Yerushalayim that were liberated B’chasdei Hashem in the June 1967 Six Day War, areas including Gilo, Ramat Eshkol, Pisgat Ze’ev, N’vei Yaakov and more as “settlements”; the UN leader stated “settlements are illegal and a violation of international law and he feels that “provocative actions” should be avoided towards reaching “a lasting peace with the PA”, which means from his perspective, Israel may never build in the areas mentioned, along with many other areas.

While directing his anti-Semitic comments at the Mideast, the UN leader fails to find time to strongly condemn the ongoing daily slaughter of civilians in Syria, or the Iranian nuclear threat, but prefers to concentrate his peace making concerns on Israel building in her capital, an act that seriously jeopardizes regional peace efforts.