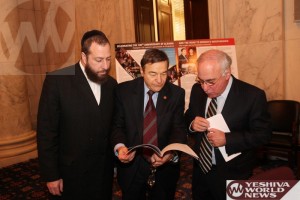 The Kennedy Caucus Room in the Russell Senate Office Building in Washington DC was the venue for celebrating the 100th anniversary of the independence of Albania which was hosted by Albanian American Civic League and Albanian American Foundation to highlight the fact that Albania is the only nation that can claim that every Jew who either lived in Albania or sought refuge there was saved during World War II. Also, few people know that the rescue in Albania could not have happened without the help of Albanians living in Nazi-occupied Kosova, which became an independent state in 2008.

Ambassador Barukh Binah, Deputy Chief of Mission at the Embassy of Israel, Richard Stone, Chairman of the Conference of Presidents of Major American Jewish organizations, Rabbi Joseph Potasnik, New York Board of Rabbis; Rabbi Levi Shemtov, American Friends of Lubavitch, Bob Levi, newly elected Chairman of the National Council of Young Israel, Rabbi Warren Stone, Rabbi Leonard Guttman all warmly paid tribute to Albanians whose families, both Muslim and Christian, participated in the rescue of Jews in Albania and Kosova. Annette Lantos on behalf of her late husband, Congressman Tom Lantos received awards for their twenty-year effort to bring peace to Southeast Europe and international attention to the story of Jewish survival in Albania.

Albania which emerged after 400 years of occupation by the Ottoman Empire on November 28, 1912, has good diplomatic relations with the State of Israel.

At the luncheon that was chaired by Ron & Karen Rettner and hosted by the Albanian American Civic League and Albanian American Foundation under the leadership of former Congressman and founding President Joe DioGuardi and Balkan Affairs Adviser Shirley Cloyes DioGuardi. The Luncheon featured the participation of Representatives Dana Rohrabacher Chairman of the Oversight and Investigation Subcommittee of the House Foreign Affairs Committee, Rohrabacher is a most forceful spokesman for human rights and democracy around the world and a great supporter of the quest for democracy in Albania. The luncheon featured International Relations Committee Chair Ileana Ros-Lehtinen, whose grandmother fled the Balkan region during the First Balkan War. Senator Charles Schumer of New York also addressed the attendees. Senator Schumer introduced a resolution commending the people of Albania for protecting and saving lives of all Jews living in Albania, or sought asylum during World War II. Other distinguished speakers included Representative Eliot Engel, Lekë Rezniqi, Secretary of the Kosova-Israeli Friendship Association, Representative Tom Reed, and Congressman Howard “Buck” McKeon Chairman of the House Armed Services Committee among others. Congresswoman Nan Hayworth was commended for her leadership of the Raoul Wallenberg Congressional Gold Medal legislation. Attendees at the luncheon included the leadership of both the Jewish and Albanian communities. Johanna Neumann, a spokesperson for the United States Holocaust Memorial Museum, a living testimony of the claims above, spoke about how her family sought refuge in Albania from Germany and subsequently survived the Holocaust.

“To commend Albanians for protecting and saving the lives of all Jews who either lived in Albania or sought asylum there during the Holocaust is our everlasting obligation to the Albanian people and indeed a testament to the unique character of the Albanian people. The Jewish people will eternally grateful to Albanians and I know that I speak on behalf of the Jewish community when I say we don’t have enough praise for Joe DioGuardi and Shirley Cloyes DioGuardi for their commitment to bringing to light this incredible chapter of Holocaust history” said Ezra Friedlander, CEO of The Friedlander Group whose firm coordinated the luncheon tribute.