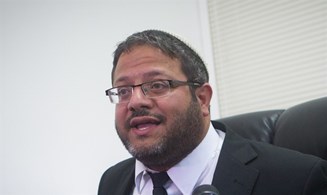 Attorney Itamar Ben-Givir chalked up another win, this time in the Jerusalem Magistrate Court in his case against a Yellow convenience store.

The store was ordered to pay him NIS 200,000 after he arrived at the Yarid HaKetana branch in Tel Aviv, filled his vehicle up with gas, and purchased a soft drink.

At the same time, employee Jackie Dalak recognized him as being the high profile right-wing attorney he is, and he gave him a Nazi salute, “Heil Hitler” he told him. He then said, with others witness, we welcome the fuhrer and called him a Nazi.

Ben-Givir filed a lawsuit against the Paz Company and the manage of the gas station.

Justice Dorit Feinstein ordered the defendants to pay NIS 200,000 in addition to tens of thousands of shekels in court fees.