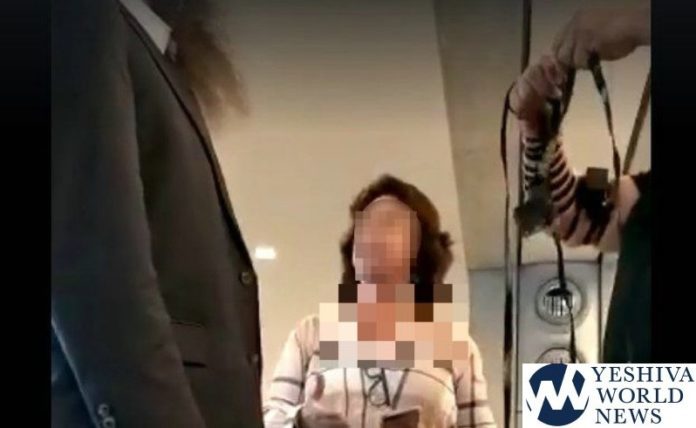 The womanwho objected to a Chabad chossid putting tefilin on someone in Ben-Gurion Airport a few days ago, has been identified as a well-known Israeli professor and lecturer.

According to a Channel 20 News report, the woman is Professor Penina Peri, wife of Yoram Peri, a professor of sociology and a former president of the New Israel Fund from 1999-2001. The video went viral on social media.

Arutz-7’s Ben Zeigdon contacted Yoram Peri, who explained he was unaware of the incident. However, he did confirm his wife left Israel.

Peri also served as a senior lecturer in Sapir College and Levinsky College. She is said to be an expert on multi-cultural theories and is known to have published books such as “Education in a Multicultural Society: Pluralism and Meeting Points between Cultural Rifts.”

The Peri family has been living in Maryland for the past few years, and this is why she was flying after the incident captured on video. Today, she heads the Joseph and Alma Gildenhorn Institute for Israel Studies at the University of Maryland.

Head of the Chabad House in Pisgat Ze’ev, the man in the center of the storm, Rav Meir Herzl, told Channel 20 that he was a bit early at the airport and decided to use the time to merit other Yidden with putting on tefilin. He approached persons and asked them if they wished to put on tefilin. One responded, “gladly”.

Rav Herzl added, “Suddenly, a woman approached us and began screaming and insisting we leave the area and not daven in proximity to her. I did not pay attention to her. I continued putting tefilin on the man, who asked the woman to permit him to daven in quiet for a few minutes, but she would not hear of it. She shouted as seen in the video.

When asked how he kept his cool, Rabbi Herzl explained “I did not see cause to get into it with her and respond. This is how we carry out ‘Mivtzaim’, as the Rebbe instructed us, to engage in and see the light exclusively, to bring additional light into the world and this blocks out the darkness on its own”.