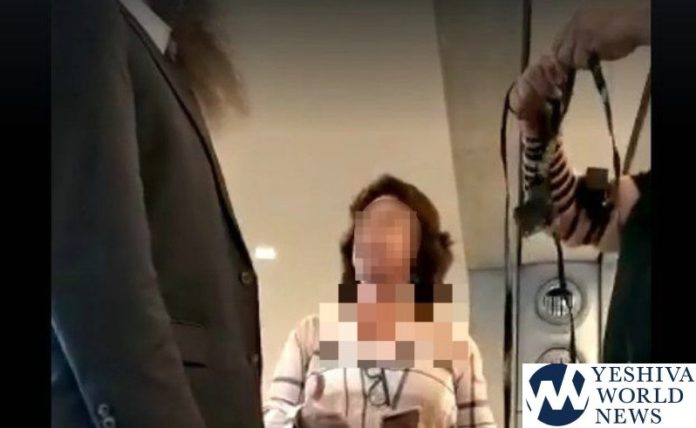 It appears the ongoing incitement against religion and chareidim has influenced some. A traditional Israeli, Gad Kaufman, was traveling on a business trip and simply wanted to take advantage of the opportunity to put on Tefilin, after being asked by a Chabad shaliach in the airport if he would to.

At that moment, both he and the Chabad shaliach were harassed by a woman who did not exactly see eye-to-eye with one putting on Tefilin.

The self-hating Jewish woman is seen loudly mocking and insulting the two men. She demanded that they “move because you are bothering me….and “why are you doing this here, there are people here, this is a public place.”

The following was written by Gad Kaufman on his Facebook page, “An amazing incident occurred this morning in the Airport, when I was asked politely by a Chabad man, if I wanted to put on tefillin. I replied in the affirmative, and then a woman jumped up with a crazy look and began to curse, harass and disturb!

“It is really shameful that being a Jew in this country is being persecuted by the leftist bohemian. If I were a Muslim or a Christian, would this behavior be more legitimate,” Kaufman asked rhetorically.

The accompanying video shows the Chilul Hashem nebach, and just how a yid can unfortunately drop to such a level.