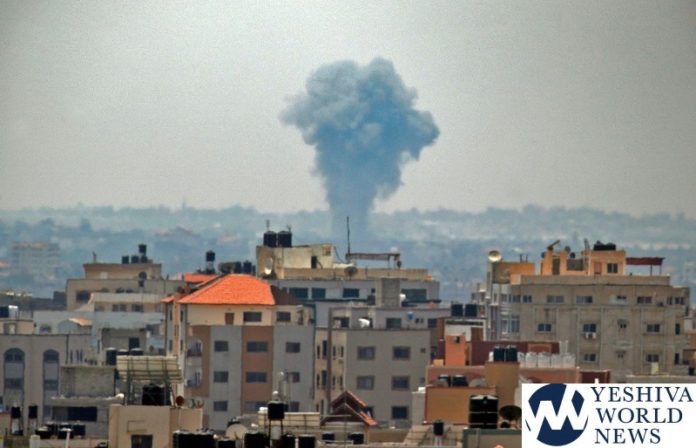 After a day that saw an immense barrage of rockets and mortars fired at Israel from terrorists in the Gaza Strip, red alert sirens have continued late into the night, forcing tens of thousands of Israelis to sleep in protective shelters. The IDF has resumed its strong retaliatory strikes on Gaza.

Sources within the Islamic Jihad terror group claimed on Tuesday night that they have reached a cease-fire deal with Israel based upon the understandings established at the end of Operation Protective Edge in 2014. The cease-fire was brokered by Egypt who has been pressuring all parties to restore calm to the area. Moments after the report surfaced, other reports quoting high-level Israeli sources denied any such agreement.

A few moments before the announcement came, additional air raid sirens were heard in Ashkelon, Netivot, and all of the towns in the Gaza periphery as another barrage of missiles swept the area. The sirens sounded at 10:25 p.m. and were the first ones to sound in Ashkelon and Netivot, as most of the rocket fire during the day had been focused on the towns in the immediate proximity to the Gaza Strip.

Since 2:40 p.m. sirens sounded in the Gaza Periphery towns at least once an hour throughout the day. According to the IDF more than 100 rockets were fired at Israel, most of which were intercepted by the Iron Dome defense system.

Due to the barrage of rockets being fired at Israel, the United States has called for an emergency meeting of the Security Council of the United Nations. The meeting is set to take place Wednesday.

Today, over a 100 mortar rounds and rockets were fired at Israel by these Palestinian terrorists from #Gaza, putting Israeli lives in danger.

That’s why the IDF destroyed today 40 terrorist facilities and assets in the Gaza Strip. We will always defend our country & our people. pic.twitter.com/bo6pYdL9bZ

Hamas and the Palestinian Islamic Jihad terror organizations commited acts of terrorism against Israel throughout the day pic.twitter.com/LjqzOrur92

Israel’s Homefront Command announced that schools will continue as scheduled tomorrow for all buildings that have protective shelters that students would be able to arrive at in the allotted time for each region. Agricultural work is being permitted in the area only with special coordination and permission being granted by the ranking IDF commander in the area.

Both Hamas and the Islamic Jihad are claiming responsibility for the rocket barrage. Hamas sources said: “Our military wing has picked up the struggle and we want to let our leaders know that all options are on the table.” This is the first time Hamas has claimed responsibility for shooting rockets at Israel since the 2014 war.

A statement issue by the Islamic Jihad said that: “Egypt has requested a calming of the situation. We responded and told the Egyptians that we w ill respond with violence to any act of Israeli aggression.”

The IDF rejected that notion that a cease-fire had been reached. IDF Spokesperson Brigadier General Ronen Menlis, told journalists in Tel Aviv that: “What we have seen today from the early morning hours and onwards is a serious wave of terror being aimed at Israel. We will simply not allow this to continue. This is clearly Hamas losing control of the situation in the Gaza Strip after their attempts to cross the border fence and carry out terror attacks in Israel for the past few months have failed.”

The IDF’s response thus far has been the most aggressive and comprehensive against the Gaza Strip since Operation Protective Edge, with over 35 airstrikes on seven sites in its first retaliation on Tuesday afternoon. Some of the targets destroyed by Israeli forces included; Head offices of terror organizations, locations in which weapons were being manufactured, training facilities for Hamas insurgents, and one terror tunnel.

On Wednesday morning (1:00AM IL), the IDF announce that Israeli aircraft hit approximately 25 Hamas targets in the Gaza Strip, in a second bombardment.

This is the second round of strikes carried out by the IDF in response to mortar and rocket fire from Gaza. On Tuesday, Israeli aircraft targeted approximately 40 positions in the Gaza Strip belonging to the Hamas and Palestinian Islamic Jihad terror groups.

“Our responses will only increase in strength and severity should Hamas keep up their barrage of rockets, the IDF Spokesperson told the media. “The reason why the heads of Hamas and the Islamic Jihad went into hiding this morning, is because they know what our capabilities are.”

Video footage of the strike on a Hamas terror tunnel near the Kerem Shalom Crossing and terror sites in the Gaza Strip: pic.twitter.com/XLyOveHXNA

One of the rockets fired from Gaza struck equipment that provides electricity to the southern Gaza Strip, a spokesperson for Israel’s Electric Company says.

The damage is preventing the flow of electricity to the beleaguered coastal enclave.

The electric company says the repairs are expected to take several days.

Energy Minister Yuval Steinitz orders the company to hold off repair work until the situation is calm in order to “not endanger its workers.”

B’chasdei Hashem, despite the ongoing and heavy rocket fire, there has been no loss of life and only three injuries reported, with the most serious being a young male in moderate condition with shrapnel injuries to his lower extremities. All three have been identified as IDF Soldiers. The army says in a statement the three were airlifted to the Soroka Medical Center in Beersheba. One suffered moderate injuries to his legs, and the other two sustained light wounds.

Since the rocket fire began, United Hatzalah Psychotrauma and Crisis Response Unit volunteers have treated 10 people so far in various communities in the Gaza periphery who have suffered emotional shock due to the barrage of rockets being shot from the Gaza Strip and the resulting iron dome interceptions. Just before 5:oo p.m. a mother and daughter who suffered emotional shock after the iron dome shot down a rocket in their vicinity.

Psychotrauma and Crisis Response Unit volunteers in the entire south are on high alert and will be ready at a moments notice to respond to any emergencies. Director of the Psychotrauma Unit Miriam Ballin said: “We strongly encourage anyone who is suffering emotional or psychological trauma to the tense situation currently developing in the south to call United Hatzalah’s dispatch and command center at 1221 and request assistance. Our volunteers are highly trained and at the ready to assist anyone in need of assistance.”