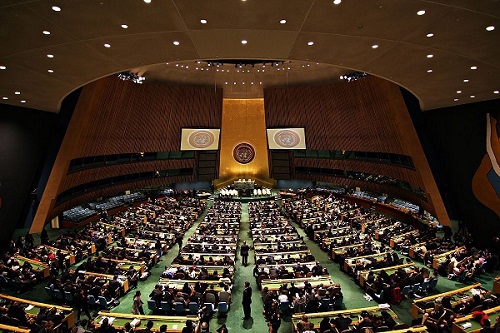 The United Nations General Assembly condemned Israel on Wednesday for “excessive use of force” against Palestinians, and asked U.N. chief Antonio Guterres to recommend an “international protection mechanism” for ‘occupied’ Palestinian territory.

The resolution was adopted with 120 votes in favor, 8 against and 45 abstentions. It was put forward in the 193-member General Assembly by Algeria, Turkey and the Palestinians following the U.S. veto of virtually the same resolution in the Security Council on June 1. U.S. Ambassador Nikki Haley called that Kuwait-sponsored resolution “grossly one-sided” for criticizing the use of force by Israel while not mentioning the Islamic militant group Hamas, which controls Gaza and instigates much of the violence at the border with Israel.

#UNGA adopts resolution on Protection of the Palestinian civilian population with vote of 120 countries in favour; 8 against; and 45 abstentions. https://t.co/COtk2FGIlX pic.twitter.com/nl94JKJTxc

“The nature of this resolution clearly demonstrates that politics is driving the day. It is totally one-sided. It makes not one mention of the Hamas terrorists who routinely initiate the violence in Gaza,” U.S. Ambassador to the United Nations Nikki Haley told the General Assembly before the vote.

The United States failed in a bid to amend the resolution with a paragraph that would have condemned violence by Hamas. The US amendment, which was voted on first, was approved by a vote of 62-58 with 42 abstentions. However, General Assembly President Miroslav Lajcak declared that under U.N. rules a two-thirds vote was needed, so the amendment failed.

While procedural maneuvers were used to block it, We’re proud that by working with the Americans and our friends around the world, a majority of nations in the @UN voted for the first time to condemn the terrorists of Hamas. pic.twitter.com/coyzqWPq1P

More than 120 Palestinians have been killed and 3,800 wounded by Israeli forces in Gaza border protests since March 30. The largest number of deaths occurred on May 14, the day the United States moved its embassy in Israel to Jerusalem from Tel Aviv.

Israel says Hamas has used the protests as cover for attacks on the border fence. Washington has maintained Israel’s right to defend itself and refrained from joining calls for Israeli restraint.

“We need protection of our civilian population,” Palestinian U.N. envoy Riyad Mansour told the General Assembly before the vote, adding that the resolution was “intended to contribute to a de-escalation of the volatile situation.”

“We cannot remain silent in the face of the most violent crimes and human rights violations being systematically perpetrated against our people,” Mansour said.

He stressed: “We need action. We need protection for our civilian population. … Is that a crime to ask for?”

The resolution demands that Israeli forces stop “any excessive, disproportionate and indiscriminate force.” It calls for “immediate steps towards ending the closure and the restrictions imposed by Israel on movement and access into and out of the Gaza Strip.”

It also “deplores the firing of rockets from the Gaza Strip against Israeli civilian areas,” but doesn’t say who is doing the firing.

The resolution also asks Secretary-General Guterres to report back within 60 days on proposals “on ways and means for ensuring the safety, protection and well-being of the Palestinian civilian population under Israeli occupation, including … recommendations regarding an international protection mechanism.”

In December, 128 countries defied President Donald Trump and voted in favor of a U.N. General Assembly resolution calling for the United States to drop its recognition of Jerusalem as Israel’s capital.

Below is the text of remarks delivered by US Ambassador Nikki Haley:

Good afternoon. There are many terrible things happening in the world today. Many things that demand our urgent attention.

As we speak, protests are taking place in Nicaragua. Over 146 peaceful Nicaraguans have been killed by their own government in the past two months. But we are not talking about Nicaragua today.

The people of Iran have been protesting their government for months. Thousands of peaceful Iranian protestors have been arrested. Over 25 are dead. But we’re not talking about Iran either.

The world’s worst humanitarian crisis is going on right now in Yemen. Millions are at risk for starvation. In Burma, almost a million innocent people have been driven from their homes in a campaign of ethnic cleansing. But we’re not talking about Yemen or Burma.

Instead, today the General Assembly is devoting its valuable time to the situation in Gaza. Gaza is an important international matter. But what makes it different and more urgent than conflicts in Nicaragua, Iran, Yemen, Burma, or many other desperate places? Because we haven’t gathered here to discuss any of those urgent issues. The United States would welcome that.

What makes Gaza different for some is that attacking Israel is their favorite political sport. That’s why we’re here today.

The nature of this resolution clearly demonstrates that politics is driving the day. It is totally one-sided. It makes not one mention of Hamas, who routinely initiates violence in Gaza. Such one-sided resolutions at the UN do nothing to advance peace between Israel and the Palestinians. Everyone recognizes that. But advancing peace is not the goal of this resolution.

I suspect even my Turkish friends know the passage of this resolution won’t change anything, but that it looks good for the people back home to think they’re doing something. That is pure politics. In fact, this resolution makes peace less possible.

It feeds a narrative to the desperate people of Gaza that their leaders are not responsible for their predicament. It stokes hatred. It sacrifices honesty, accuracy, compromise, and reconciliation in favor of the advancement of a narrow political agenda.

If we were being honest, we would acknowledge that there are no perfect actors on either side of this conflict. But it does no one any good to pretend that all blame lies on one side. I wish everyone supporting this one sided resolution would put as much energy into encouraging President Abbas to come to the negotiating table, as you do to falsely imply to your people back home that you’re doing something.

Israel withdrew completely from Gaza in 2005. Hamas has been the de facto government in Gaza since 2007. This strip of land along the Mediterranean coast has enormous potential. And yet, after 11 years of Hamas rule, Gaza has electricity for only a few hours a day. It has enormous unemployment and poverty. It is a haven for terrorist activity. At what point will the UN actually hold accountable those who are in charge of Gaza and running it into the ground?

Instead, this resolution holds Hamas completely unaccountable for most of the recent unrest. It blames everything on Israel. But the facts tell a different story. It is Hamas and its allies that have fired over a hundred rockets into Israel in the past month, hoping to cause death to as many civilians and as much destruction as possible. It is Hamas that has used Palestinian civilians as human shields at the boundary fence, seeking to incite violence and overrun the border. It is Hamas that refuses to cooperate with the Palestinian Authority to unite in the pursuit of peace. It is Hamas that calls for the destruction of the state of Israel within any borders. And yet the resolution before us not only fails to blame Hamas for these actions, it fails to even mention Hamas. This is the dangerous, counter-productive decision the General Assembly is about to take.

But there is still a chance for this body to try and right this wrong. We still have the opportunity to salvage something honest from this discussion. The United States is offering an amendment that provides a small step in the direction of balance. Our amendment rightly condemns Hamas’s indiscriminate firing of rockets into Israeli civilian communities. It accurately condemns the diversion of aid and resources from civilian needs into military infrastructure, including terror tunnels used to attack Israeli citizens. It justly expresses our grave concerns about damage done to border crossings that are hindering the delivery of desperately needed food and fuel to the people of Gaza.

This is a modest amendment that reflects the minimum truth of what is going on in Gaza. It is the least that any self-respecting international organization or nation can do for the cause of peace.

Today’s choice for the General Assembly is simple. It is the choice between using our time here to advance peace and security, or using it to stoke hatred and conflict. This vote will tell us much about which countries are serious about accuracy and reconciliation and which countries are bound by their political agendas. For the sake of peace, and for the sake of this institution, I urge my colleagues to support the United States’ amendment. Thank you.