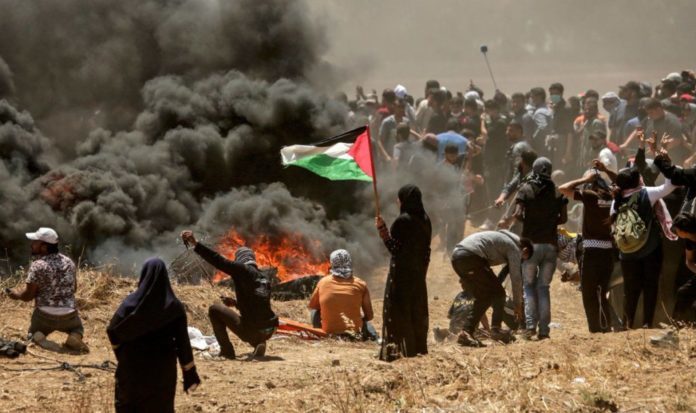 Most of the Palestinians killed this week by Israeli fire at violent protests along the border with the Gaza Strip were members of Hamas, the militant group said Wednesday.

Israel, which has faced blistering international criticism over its response, is likely to latch on to the remarks to bolster its claims that Hamas has used the weekly border protests as cover to stage terror attacks.

But with the images of rifle-toting Israeli snipers facing off against seemingly unarmed protesters beamed by the anti-Israel ‘Fake News’ media around the world, the remarks by Hamas may do little to convince Israel’s detractors, including the Palestinians.

In an interview with Baladna TV, a private Palestinian news outlet that broadcasts via Facebook, senior Hamas official Salah Bardawil said 50 out of the nearly 60 protesters killed Monday were Hamas members, with the others being “from the people.”

Yesterday I criticised Israel’s handling of the protests at the Gaza border. I should not have been so quick to judge. We now learn that the 50 of those killed were Hamas terrorists. Israel had an absolute right to defend itself against such attacks. https://t.co/nkFO1XWUDh

Bardawil did not elaborate on the nature of their membership in the group and his claim could not be independently verified.

The affiliation may matter little to those who have been reading and watching reports from the rabid anti-Israel media the last 48 hours.

“It was clear to Israel and now it is clear to the whole world that there was no popular protest. This was an organized mob of terrorists organized by Hamas,” said Israeli Foreign Ministry spokesman Emmanuel Nahshon.

A Palestinian who crossed yesterday the Gaza border fence into Israel and was caught, explains how Hamas encouraged people to participate in the attacks on the border and how it used kids and women as human shields.

Prime Minister Benjamin Netanyahu said Israel had tallied similar numbers to Hamas and “won’t let those who call for our destruction to breach our borders and to threaten our communities.”

Yet another smoking gun: Hamas leader Mahmoud al-Zahar says the violent Gaza riots aren't "peaceful resistance," but rather are "bolstered by [Hamas's] military force and by [its] security agencies" pic.twitter.com/cGBixViYmE

Some facts:
▪ At least 13 of those killed on Monday have been identified and claimed by Hamas and Islamic Jihad (see images)
▪ Israel says it's identified at least 24 of the dead as belonging to terror groups
▪ A Hamas leader has said that 50 of the dead belonged to his group pic.twitter.com/T0msEeKCHu

On Tuesday, the IDF released a video that appeared to show protesters detonating several explosions near the border. It also said its forces had killed a squad of Hamas gunmen who opened fire at troops.

Lt. Col. Jonathan Conricus, a military spokesman, said 14 of those killed Monday were actively involved in carrying out attacks.

Israel says it uses live fire only as a last resort. Snipers are supposed to aim at protesters’ legs and can shoot only with approval from a commander.

According to statements released on Tuesday, Rosh Chodesh Sivan, by Prime Minister Binyamin Netanyahu, Hamas was paying Gazans to participate in the border violence, explaining why tens of thousands reported to the fence, many bringing children and babies.

While the international media seeks to tarnish the image of the IDF and Israel by accusing them of killing children and babies, the situation begs the question why children and babies were brought along when the participants knew they were instructed to engage in clashes along the border, and even try to penetrate or compromise the border fence.

PM Netanyahu was interviewed by CBS Evening News anchor Jeff Glor, who asked if he would have done anything differently in light of the clashes that left 58 Gazans dead, including 24 terrorists?

“Well, I wish that it wouldn’t have happened at all. “I mean, Hamas is pushing people with a view of a massive infiltration into Israel, openly declaring their goal is to destroy Israel. They’re paying these people. So, it’s, it’s not the, you know, the peaceful demonstrations that you think about”, explained the prime minister.

“They’re pushing civilians, women, children into the line of fire with the view of getting casualties. We try to minimize casualties. They’re trying to incur casualties in order to put pressure on Israel, which is horrible,” he continued.

Mr. Netanyahu continued, explaining everything was tried, as non-lethal means are preferable, but ultimately, Israel is left with no choice and “It’s a bad deal”. He added shooting below the knee is not always effective, and clearly, Hamas orchestrated this and wanted this exact outcome. He added he is unware of any army in the world that would have acted differently.

Glor went on to quote IDF Chief of Staff Lt.-General Gadi Eizenkott, who recently stated Gaza is on the verge of collapse, asking Mr. Netanyahu what will occur if there is collapse.

“Well, first of all let’s understand why it’s on the verge of collapse, because the Palestinian Authority has stopped giving them money. The money they normally gave them, they stopped giving them, so they’re in financial crisis. So, having received less money and taking the money they have to their terror machine and to the stuff that they are doing yesterday, that’s why Gaza is in crisis”, explained the Prime Minister.

The prime minister added that for as long as Hamas continues calling for the destruction of the State of Israel, he does not see any situation in which a dialogue is possible.

Fox News takes on the NY Times and the United Nations in the accompanying video, which points at the extreme level of anti-Israel bias. The video was published earlier this week YWN-ISRAEL as well.

What does Hamas want?

Does it want humanitarian aid for Palestinians in Gaza, whose lives became harder as a result of Hamas’ oppression & terrorism, or does is prefer to use Palestinians as pawns to serve its terrorist ideology?

The answe is clear: Using Palestinians as pawns. pic.twitter.com/ssjXR5B8zy