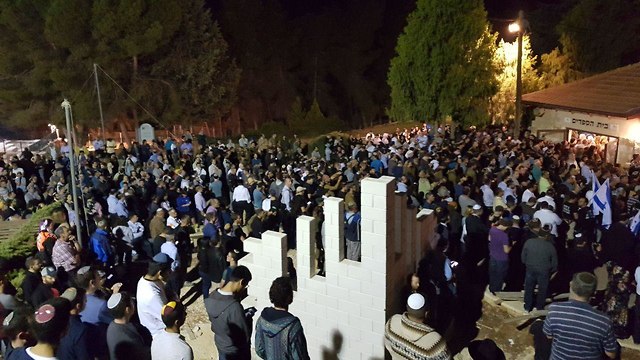 Thousands of people on attended the funeral of Ari Fuld H”YD at the cemetery in Kfar Etzion on Sunday night. Ari was murdered by a terrorist at the Gush Etzion junction earlier in the day.

Ari was a 45-year-old immigrant from the US and resident of the Gush Etzion town of Efrat. He was stabbed in the back by a 17-year-old Arab terrorist from the Hevron area. Before collapsing, Fuld managed to shoot the terrorist together with another civilian and a security guard. The terrorist was moderately wounded.

He is survived by his wife and four children.

Heartbreaking: @AriFuld's sons and father recite Kaddish, the mourner's prayer, for the first time during his funeral. Ari, an American-Israeli 45-year-old father of four, was stabbed to death by a Palestinian assailant earlier today. pic.twitter.com/j9Znt1hj9K

PHOTOS: Prime Minister Benjamin Netanyahu and Bayit Yehudi Chairman Naftali Bennett are among the visitors to the family of Ari Fuld H"YD “This evening I met the parents and siblings of the Israeli hero Ari Fuld. I embraced them in the name of the whole nation of Israel during this terrible time for them. We owe our lives to heroes like Ari. We will always remember him,” Netanyahu said after meeting the family of the 45-year-old victim.

Today we lost a hero. @AriFuld was a hero in all senses of the word. Loving and living the Kedushas Eretz Yisroel. Hashem should bring comfort to @HilzFuld and the entire family – Please enjoy it and do a Mitzvah in his Zchus pic.twitter.com/wkw55nhlrs

🇮🇱 PHOTOS: Shlomo Neeman, leader of the Gush Etzion regional council, temporarily moved his office to the spot of the terror attack that claimed the life of Ari Fuld H"YD on Sunday, showing the terrorists that they won’t win and #Israel will mourn today and continue tomorrow in Ari’s strong spirit

My friend Ari Fuld (w/ me in photo) an American/Israeli patriot was murdered in cold blood today by young Palestinian terrorist who stabbed Ari IN THE BACK. Despite being stabbed, Ari chased and shot the coward, who lived. Ari died. I was with Ari in July in Efrat. #heartbroken pic.twitter.com/0ABH5wIK2r

After being stabbed he heroically ran down the terrorist and shot him before he could attack other innocent people. May his memory forever be a blessing. —> https://t.co/S7GpDFamqX

America grieves as one of its citizens was brutally murdered by a Palestinian terrorist. Ari Fuld was a passionate defender of Israel & an American patriot. He represented the best of both countries & will be deeply missed. May his family be comforted & his memory be blessed.

ANOTHER stabbing attack attempted at a security booth in #Nazereth. Baruch Hashem the terrorist was neutralized without any serious injuries