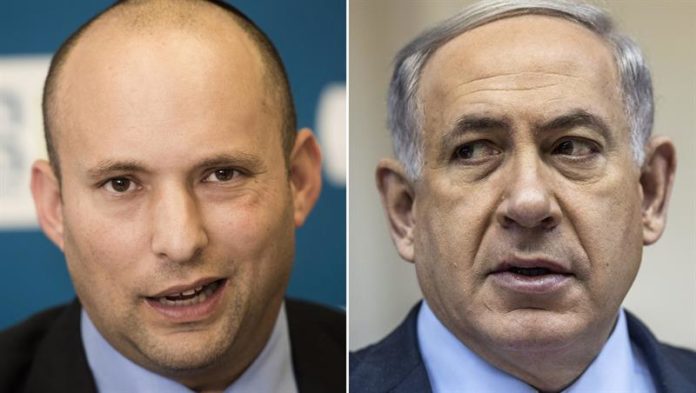 It was not just Bennet this time, and before the cabinet voted to approve PM Netanyahu serving simultaneously as Defense Minister, both Bennet and party colleague Justice Minister Ayelet Shaked opposed the move, telling the Prime Minister, “The hole in the gate is not the High Court, it is the IDF” trying to get the point across that the matter is one of security and safety of the troops, not just legalities. Shaked explained she would abstain, unwilling to raise her hand to appoint Netanyahu the new permanent Minister of Defense.

Reportedly, Mr. Netanyahu responded, “You’re doing something foolish. We have [all] heard your ultimatums”. Bennet fired back, “It is a shame [that you] do not fight terror like government ministers”.

Transportation Minister Yisrael Katz, who is close to Mr. Netanyahu, intervened, stating there is no reason Netanyahu cannot serve as both Prime Minister and Defense Minister. Shaked accused Katz of sucking up to the Prime Minister in the hope of being appointed to the vacant Foreign Ministry slot.

Mr. Netanyahu on erev Shabbos announced that in January 2019, he will appoint a new Minister of Absorption as well as a Minister of Foreign Affairs while holding on to the Defense and Health portfolios. The latter permits Deputy Minister Yaakov Litzman continue with ministerial authority, thereby the Prime Minister avoids shaking the fragile coalition, which operates with a one-vote majority.