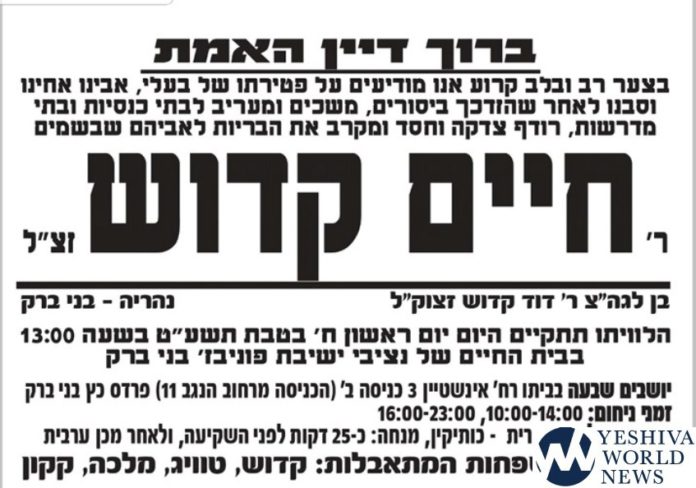 The levaya of HaGaon HaRav Chaim Kadosh ZT”L took place in Bnei Brak on Sunday afternoon. He was 71-years-old when he was niftar on Sunday, due to a difficult illness.

The niftar was born in Morocco to HaGaon HaTzaddik Rebi David Kadosh ZT”L, who lived in Nahariya, and he was known as The Maggid from Merkash.

Persons who knew the niftar are quoted telling BeChadrei Chareidim that he started the first neitz minyan in Nahariya some 30 years ago, in Yeshivat Abir Yaakov as well as delivering shiurim for decades in Beit Knesset Beit Yaakov. He enjoyed a particularly close relationship with Rebi David Abuchatzera.

The illness was detected in the rav about a half year ago, hitting the entire frum community in the city hard. He was buried in Bnei Brak and the family will sit shiva at 3 Einstein Street in the Pardes Katz neighborhood of Bnei Brak.