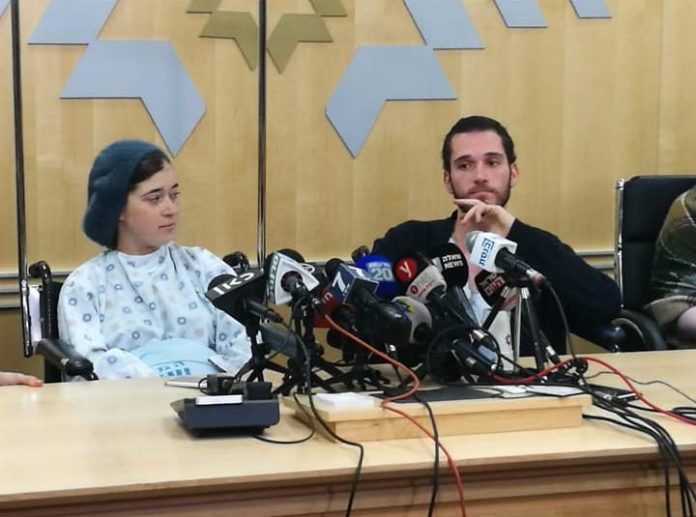 Amichai and Shira Ish-Ran, the couple who were shot in the terror attack at Ofra junction last week and subsequently lost their child who was born prematurely due to the attack, held a press conference on Sunday for the first time since the attack occurred.

The child, who at the time of the attack was unborn, was delivered in hospital later that day as a result of the attack. He was named Amiad Yisrael (translation: our people are here forever) and he died three days later in the hospital. Amiad would have been the couple’s first child.

Amichai opened the conference which took place in Shaare Tzedek Hospital in Jerusalem and said: “First of all we wish to thank Hashem who performed miracles for us. The fact that my wife can sit here with us today is a miracle. I was shot in the foot three times and soon I should be able to walk. That too is a miracle. These things do not simply happen so we have to say thank you.”

Amichai continued and thanked many of the people gathered in the room. “Thank you to our parents and families, who are helping us and giving us so much. They never leave us alone and are always asking “what else can we do for you?”  There simply is no one like you. Thank you also to the professional and personable hospital staff, who even cried with us. Thank you to the paramedics and EMTs who saved Sarah’s life and did everything that they could possibly do in the moments that mattered the most. None of this is simple or taken for granted. Thank you to the entire Jewish people, who are continually sending us messages and want to come and visit us to the point where we had to ask people to stop. We have been sent food for Shabbos, sweets, flowers, anything one can imagine.”

Reflecting for a moment on what the couple had lost Amichai said: “This is what our child, who was only alive for three days, was able to do. He unified us, all of us, from all parts of the spectrum: Charedim, secular, Ashkenazim and Sephardim, Litvaks and Chassidim. I am proud of the Jewish nation. This is something that the terrorists will never succeed to take from us. They can shoot us, they can run us over with their vehicles, they can murder our children, but they will never succeed at breaking us. We won’t let them.”

Shira then spoke after Amichai: “More than anything I and thankful to HaKadosh Baruch Hu, and to everyone who donated blood to Magen David Adom. Your blood is now flowing though my veins. It is because of you that I am alive.”

Shira concluded by saying: “I screamed that I was losing consciousness and the paramedic told me that I wasn’t.”

🙏🏼🙏🏼🙏🏼 Shira Ish-Ran, mother whose newborn baby was killed in a terror attack this week, asks all parents to give their children a hug and tell they they love them ‘no matter what’

🙏🏼💔 Kumzits in the hospital room of Shira and Amichai Ishran, whi were wounded and lost a newborn child in the terror attack in Ofra

WATCH: Motzei Shabbos Kumzits with Ishai Ribo in the hospital room of the Ishran couple wounded in the Ofra terror attack