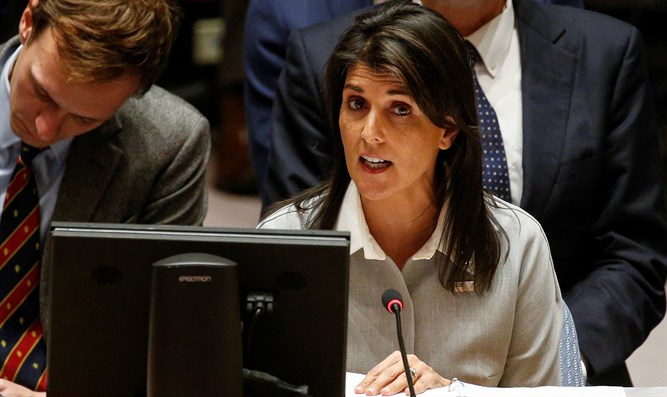 U.S. Ambassador Nikki Haley gave a hint, but no details, of the Trump administration’s peace plan for Israel and the Palestinians on Tuesday, saying it’s long, takes advantage of new technology, and has a lot both sides will like and things they won’t like.

Haley said Israelis and Palestinians as well as countries around the world have a choice: focus on the parts they dislike, which she said means returning “to the failed status quo of the last 50 years,” or focus on parts they like and encourage peace negotiations to move forward.

The U.S. ambassador, who said she has read the plan, told the U.N. Security Council that “both sides would benefit greatly from a peace agreement, but the Palestinians would benefit more, and the Israelis would risk more.”

Haley, who is stepping down at the end of the month, said moving forward to negotiations and peace “will need leaders with real vision to do it.” She declared: “The world will be watching.”

Immediately before the meeting, eight European Union members stood outside the Security Council chamber and read a joint statement emphasizing the EU’s “strong and continued commitment” to the internationally agreed requirements for Israeli-Palestinian peace — an apparent message to the Trump administration.

“The EU is truly convinced that the achievement of a two-state solution based on the 1967 borders with Jerusalem as the capital of both states, that meets Israeli and Palestinian security needs, and Palestinian aspirations for statehood and sovereignty, ends the occupation and resolves all final status issues … is the only viable and realistic way to end the conflict and achieve just and lasting peace,” the statement said.

Haley made no mention of any of these issues in her last speech at the council’s monthly Mideast meeting, stressing instead the “unshakeable bond” between the United States and Israel, which she has reflected in her nearly two years as U.S. ambassador.

“Given my record, some might mistakenly conclude that I am unsympathetic to the Palestinian people,” she said. “Nothing could be further from the truth.”

Haley said neither Israelis nor Palestinians should make peace at “any price” but she highlighted the differences between the two sides.

“Israel wants a peace agreement but it does not need one,” she said.

On the other hand, Haley said, the Palestinian people “are suffering terribly, while their leadership clings to 50-yar-old demands that have only become less and less realistic,” and a peace agreement holds the prospects “of a massive improvement in the quality of their lives and far greater control over their political future.”

She said “it is with this backdrop in mind that the Trump administration has crafted its plan for peace between Israel and the Palestinians.”

U.S. President Donald Trump calls the plan — drafted by a team headed by his son-in-law Jared Kushner and adviser Jason Greenblatt — the “Deal of the Century.”

Nikolay Mladenov, the U.N. Mideast envoy, told the council he “remains concerned by the weakening of international consensus and the absence of collective efforts to achieve an end to the (Israeli) occupation and the realization of a negotiated two-state resolution of the Israeli-Palestinian conflict.”

“At the end of 2018, we are nowhere closer to reviving efforts for a negotiated solution,” he said. “Without a political horizon, all our collective and individual efforts merely contribute to managing the conflict rather than resolving it.”

Mladenov also reported to the council on Israel’s compliance with a December 2016 resolution that condemned Israeli settlements in lands the Palestinians want to include in their future state and said the settlements have “no legal validity.” The resolution demanded a halt to such activities for the sake of “salvaging the two-state solution.”

The U.N. Mideast coordinator said Israel has taken “no steps” to comply with the resolution and has continued expanding settlements and constructing new ones.

Over the past year, he said that “although Gaza has been the most volatile, the risk of an explosion in the West Bank has also grown.”

Mladenov warned that “the dangerous escalation of terrorist attacks, clashes and violence in the West Bank” in the past days and weeks have led to deaths of Israeli and Palestinian civilians and Israeli soldiers.

Israeli security measures following these incidents, its search operations in the West Bank city of Ramallah, as well as clashes and protests that turned violent “are adding to an already tense atmosphere,” he said.

Mladenov echoed Secretary-General Antonio Guterres in calling on Israeli and Palestinian security services “to work together to restore calm and avoid escalation.”

Ambassador Haley: "The world must know that America will remain steadfast in our support of Israel, its people, and its security. That is an unshakeable bond between our two peoples. And it is that bond–more than anything else–that makes peace possible." pic.twitter.com/N01tL7Dryi

"We will continue to offer our hand in friendship to the Palestinian people, whom we have financially supported by far more than any other country has done." pic.twitter.com/XCTbSTWL9E

"It is time we faced a hard truth: both sides would benefit greatly from a peace agreement, but the Palestinians would benefit more, and the Israelis would risk more." Ambassador Haley's full remarks here: https://t.co/4aA00qsvBS pic.twitter.com/YOS9mRCLeY