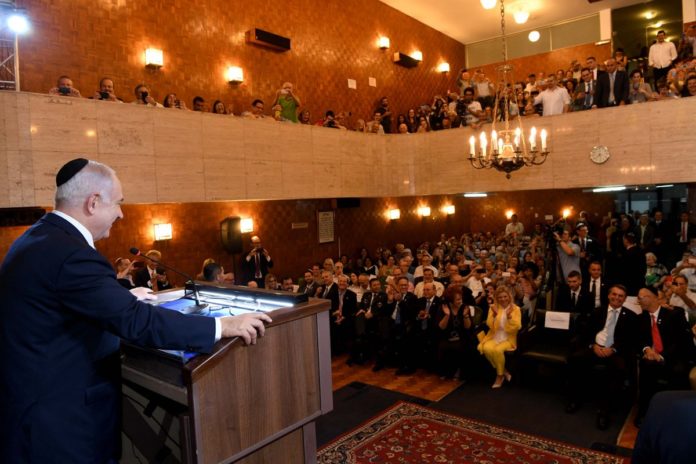 Israeli Prime Minister Benjamin Netanyahu says it is only a matter of when, not if, Brazil moves its embassy to Jerusalem.

Netanyahu made the statement Sunday during a meeting with Jewish community members in Rio de Janeiro.

Netanyahu is in Brazil to attend incoming President Jair Bolsonaro’s Jan. 1 inauguration, the first ever visit by an Israeli prime minister to the largest country in Latin America, and the fifth most populous country in the world.

Netanyahu stopped a few days early in Rio to meet with Bolsonaro as well as members of the local Jewish community, whom he addressed at the Kehillat Yaakov synagogue in Rio de Janeiro. Approximately 120,000 Jews live in Brazil, the 9th biggest in the world.

Sunday’s statement came after Netanyahu and Bolsonaro met on Friday, and after an Israeli government source insisted Saturday that Brazil’s embassy move to Jerusalem was merely “a matter of time.”

Netanyahu arrived in Brazil on Friday, accompanied by his wife Sara and son Yair, and the family is set to stay on through Tuesday.

Following a private meeting Friday in a century-old military fort on Rio de Janeiro’s Copacabana beach, the two issued warm words to the media, hailing a nascent “brotherhood” between their countries that will boost economic, military, and technological cooperation.

They then visited the synagogue, where Netanyahu told congregants: “President Bolsonaro said that this is not just a friendship or an alliance of interests [between Brazil and Israel] but also an alliance of brothers… With cooperation and brotherhood it is possible to achieve things that cannot be imagined. We agreed between us on the way to take this cooperation to new heights.”

Bolsonaro announced on Twitter last month that he intends to move the embassy from Tel Aviv to Jerusalem once he is in office. Several Arab states protested the announcement, threatening to boycott Brazilian goods.

So far only two nations have moved their embassy to Jeruselum, the United States and Guatemala.

PM Netanyahu: “We now have a new friend who knows the hardships of history, the sources of our mutual culture and the great challenges that face us in ensuring the future. ” pic.twitter.com/TzXr8VDIRA

At this occasion, the first visit by a Prime Minister of Israel to Brazil, I am honored to tell you that very soon we will host the President of Brazil, a friend of Israel, Jair Bolsonaro, in Jerusalem. Next year in our rebuilt and united Jerusalem. pic.twitter.com/hHuYeFSUO1

#Israel’s Prime Minister Benjamin Netanyahu and his wife Sara spotted enjoying lunch on #Copacabana beach in #RiodeJaneiro, #Brazil. #Netanyahu is in town for the innauguration of President-elect Jair Bolsonaro

President-elect Bolsonaro awarded Prime Minister Netanyahu Brazil’s highest and most important national award for high-ranking guests, which is awarded to prominent and influential people and was previously granted to former US President Dwight Eisenhower and Queen Elizabeth II. pic.twitter.com/YgxsWjCzWM

A wonderful meeting with the president-elect of Brazil, @jairbolsonaro. I received from him the most important national decoration in Brazil. We will strengthen our bilateral relations in economics, security & technology. A true friend. A new era in relations between 🇮🇱 and 🇧🇷! pic.twitter.com/0uc1gF2ugm

He accepted my invitation to visit Israel in the coming months and he’s going to do it, he says, by March. And I look forward to receiving him with the same spirit and the same brother hood that he received me and that you are receiving us. pic.twitter.com/89QfBgTdMV

PM Netanyahu: “As a first step of realizing this, I’ve invited President Bolsonaro to come to Israel, and he has accepted, and he would be welcome as a great friend, as a great ally, as a brother. Thank you.” pic.twitter.com/CGCxFdvtiN

Several delegations will be coming here in the coming months to map out the full extent of Brazil’s cooperation with Israel. This is a partnership that has been meaning to happen, meant to happen, and we’re going to make it happen very fast.