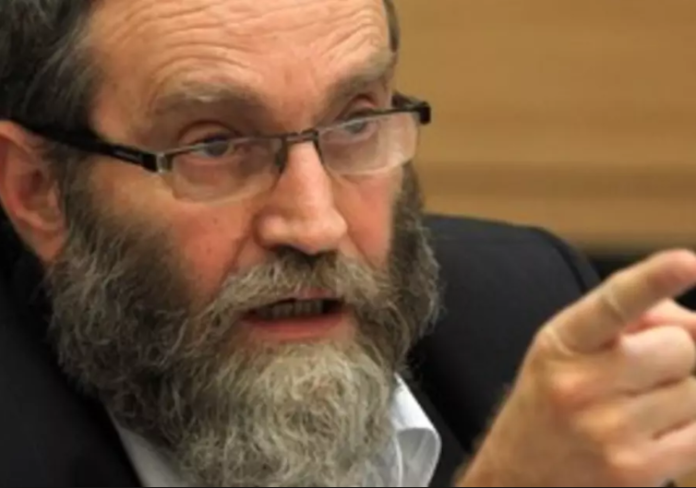 In an interview given by Degel Hatorah party chairman, MK Moshe Gafne, the seasoned chareidi politician did not rule out entering a coalition headed by Benny Gantz, who heads the new Chosen Yisrael party. Gafne wisely added however that the party’s “natural partner is Prime Minister Binyamin Netanyahu”.

“This is a possibility, but it will not occur. One may not declare Gantz as being ‘pasul’ and that we will not partner with him, but we are going with Netanyahu. His (Gantz’s) statements in his address were good. These things will have to be clarified down the road. We will only go with him if it is clear that the [religious] status quo is maintained.

Gafne on Monday morning, February 4, 2019, spoke with Kol Chai Radio, adding “If Benny Gantz assembles the coalition government, we will clarify to him that we will not join a coalition with Yesh Atid. I however estimate that Netanyahu will win and the right-wing will assemble a government. Netanyahu will beat the indictment”.

Gafne added, “A man comes along who is perceived as logical as he was IDF Chief of Staff, and he is more or less a centrist. But nevertheless, he will not succeed in toppling Netanyahu. Netanyahu has been prime minister for many years, and he has a wealth of experience. If it was possible to oust him via a normal process, then there would not be so many investigations against him”.

Gafne was of course addressing the address given last week by Gantz, his first public political address, in which he said, “We will advance the marital covenant and the outline of the Kosel [for an egalitarian prayer area], allow public transport on Shabbos in the communities that choose it, but we will be careful to preserve the sacred character of this day. We will fight against the exclusion of women and violence against women, and we will smash all the glass ceilings that prevent women from achieving equality.”

But even though he announced that he would not boycott Ganz, who supports the Chilul Shabbos, he harshly attacked Tel Aviv’s mayor, Ron Huldai, who said that he “behaves like the last of the nations. He is happy to desecrate the Shabbos, which is shocking.”

Gafne added that due to the continued Chilul Shabbos on Tel Aviv’s Yehudit Bridge, it should be named “Antiochus and not Yehudit” as he put it. “The State of Israel is democratic and Jewish and to compel workers to work on the bridge on Shabbos is not Jewish nor democratic” Gafne added.

Tel Aviv City Hall responded: There are tens of workers involved in the light rail project every Shabbos, with a permit from the government which Gafne is a member of so that the sanctity of the number of individual workers for the construction of the bridge is unclear. Ron Huldai expressed his opinion on more than one occasion that if it were possible to carry out the work on weekdays, he would be happy about it.”

In another interview, with Galei Tzahal, Gafne did not say he would not be in a coalition with Netanyahu if he is indicted, and explained: “As long as he is not convicted, we are not committed to anything. The attorney general does not appoint or remove prime ministers, people have lost their proportions.”

In an interview with Galei Tzahal, Gafne referred to the possibility of a chareidi union with Shas and said that the issue is still in negotiations, but he fears that the move will harm their power. “Elections are not enough if you are nice and beautiful, unless you bring the public and get his trust. We have to examine things in a practical and not ideological way so that we do not get to a situation where votes are lost, “he said.

Back to the Kol Chai interview, Gafne added, “I do not rule out the formation of a chareidi bloc. The benefit must not be lost, even though everyone is united. If we receive fewer seats, it may be the opposite of a Kiddush Hashem. I have no ambition to take a government portfolio. I remain on the Knesset Finance Committee. Through the committee, it is possible to act a lot. The issue of housing for the chareidi public will be dealt with significantly in the next term.”

MK Gafne attacked Yisrael Beitenu party chairman, Avigdor Lieberman, in the interview and said that “his situation in the polls is bad and apparently he decided that the last thing left for him is to attack the chareidim, who will probably answer, and that will give him seats. We clearly decided not to respond to him. In any case, his words are not gaining momentum.”