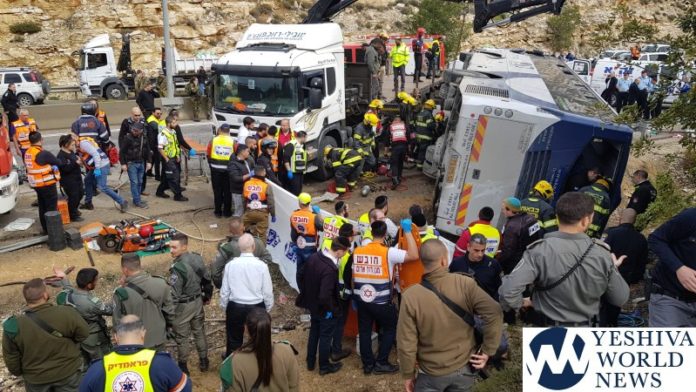 Police on Tuesday questioned the bus driver from the tragic accident on Route 443 on Sunday, February 10, 2019, which claimed the lives of two women and left dozens injured. The driver was operating a bus on the Kavim Company’s 304 line, making its way from Modi’in Illit to Jerusalem.

Police traffic investigation experts questioned the driver, who may face criminal charges including vehicular manslaughter. The driver’s license was suspended for 90 days, and he was released with restrictions following questioning.

Two women, residents of Modi’in Illit, were killed when the bus tipped over near their community, resulting in the injuring of over 50 people, B’chasdei Hashem, most with non-serious injuries.

The driver of the Ford van that was parked on the side, which the bus slammed into, was questioned by traffic investigators on Monday towards determining if he is legally responsible for indirectly causing the accident, and he too may face charges due to the events that resulted. His license was also suspended for 90 days by police.

[ESCAPING THE HORROR: Footage Of Yeshiva Bochrim Crawling Out Of 304 Bus]

According to the preliminary findings in the investigation, the van driver stopped after seeing an accident on the other side of the road. He wished to assist. The bus driver was behind him and was unable to stop in time or avoid the van, slamming into him and then flipping over.