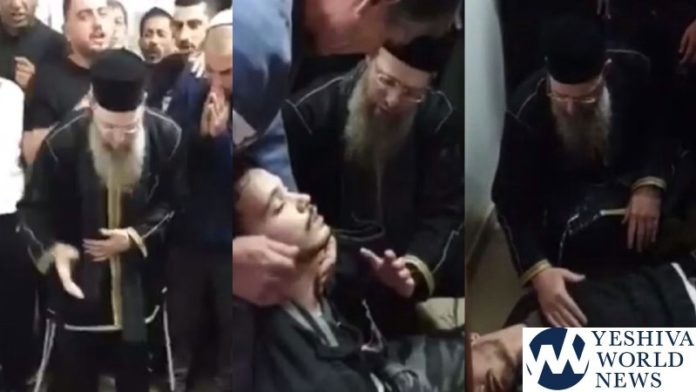 It seems that every few years another “Mekubal” in Eretz Yisroel is called to deal with a “Dibbuk”.

Watch the attached video, in which a Mekubal wearing multiple pairs of Tzitzis and a Moroccan Rabbinic-type hat, is joined by a group of individuals, as they chase a “Dibbuk” of out a body.

The Mekubal’s name is Rabbi Menashe Amon, and he appears to have been involved with several previous “Dibbuk” incidents.

In the beginning of the video, a young man who appears to be in a troubled mental state is seen sitting in a chair, surrounded by the group who are reciting Pesukim from Tehillim [Yoshev B’seiser]. The Mekubal places his finger in a circular motion on the young man’s stomach.

Suddenly, (at 35 seconds into the attached video) he begins screaming and jerking violently as if he was having a seizure. At 1 minute and 50 seconds into this event, the Mekubal begins clapping his hands wildly, and seems to wake up the sleeping young man, who again begins jerking wildly. The Mekubal helps the young man to the floor, where he appears to relax.

At 3 minutes and 20 seconds the group then begins shouting “Tzai! Tzai! (Go out! Go out!)”, as they stamp their feet on the floor. The man begins rolling over and over as they begin reciting “Ana Bekoach”.

At 4 minutes and 30 seconds the man begins rolling over on the floor.

They recite some other Tefillos, and suddenly at 7 minutes the Mekubal announces “he is fine”.

Later in the video (14 minutes), the Mekubal is seen talking to the woman who is filming the event. “Don’t call an ambulance, he will be fine in two minutes”, the Mekubal is heard saying.

The man began exhibiting seizure-like symptoms once again, at which point the Mekubal gently rubbed the man’s stomach, while another man puts water on his face.

The woman is heard saying she is hopeful that the man will be OK after suffering for “four years” from the “Ruach Ra’ah” (evil spirit). She adds that the “Tazddik” never takes even one Shekel for doing his holy work.

Here is Rabbi Menashe Amon in 2014 with another “Dibuk”.

Back in 2009, YWN published a story about a Dibuk in Brazil which caused alot of controversy. The individual was reportedly overtaken by mysterious voices in multiple languages – all without his lips not moving. The community was concerned, and the Mekubal from Yerushalayim, Rabbi Dovid Batzri was called and asked what he can do. Rabbi Batzri first made an attempt to remove the Dibuk on a webcam via Skype.

That didn’t work, so the individual was brought to Eretz Yisroel, and thousands of residents were given some free entertainment when Rav Batzri once again attempted to remove the Dibuk publicly in his Shul. Thousands of people gathered in the streets near Yeshivat Shalom, and watched and listened as Rav Batzri and a group of Mekubalim yelled “get out Dibuk!”, and repeatedly blew Shofars. Witnesses reported at the time that as the tzibur recited Shema and 13 Midos along with the mekubalim, two different distinct voices were heard from the young avreich.

In 2011, YWN reported that the man came forward and admitted that he spoke from his body. He says he learned all these languages before, and was never possessed by a Dibuk.

It is interesting to note, that at the time of the Brazil/Batzri Dibuk story, Maran Hagaon HaRav Elyashiv ZATZAL, Maran Hagaon HaRav Shteinman ZATZAL, and YBLCT Hagaon HaRav Chaim Kanievsky all refused to meet with the individual who claimed he was possessed by the Dibuk. Additionally, Hagaon HaRav Moshe Sternbach had said that the man was most probably mentally ill.

YWN also reported on another fake Dibuk story involving “Meubalim” in Elad in 2015. In that story, a well-known Rov in Elad released a scathing letter which read in part “There is much to be written on this topic among the mekubalim, some being baalei teshuvah from years ago and now delving into Toras Kabala, and they do not know their left side from their right regarding Torah and Halacha….This poor woman likely needs to be hospitalized in an appropriate facility, Hashem have mercy on her…”