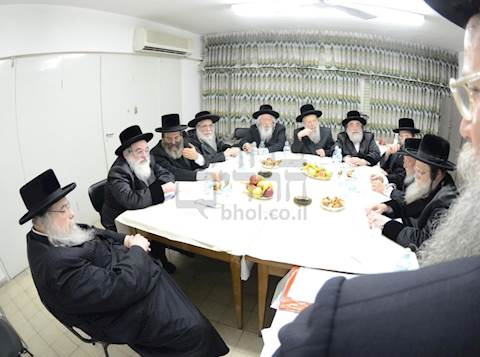 26 days before the upcoming elections in Israel the Moetzes Gedolei Hatorah (Admorim) for Agudas Yisroel met in Jerusalem to discuss strategy.

Due to the threat of Chareidi votes slipping away from their own parties and going to other right-wing parties, the Moetzes asked the Chareidi Knesset members to focus on campaigning within their own constituency and not seek out new voters. Together with that advice the Moetzes also expressed satisfaction with the establishment of the “Council of Chassidish Communities” and said that they feel that it is adding to the sense of belonging among the Chassidish communities to Agudas Yisroel and that they hope it will result in added support.

Another idea was suggested that there be a conference of all the Admorim who show allegiance to Agudas Yisroel.

The council also expressed their support for Deputy Health Minister Yaakov Litzman who is currently under investigation by Israeli police for a number of alleged crimes.