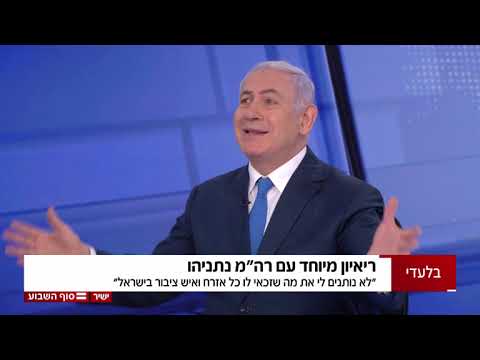 After days of attacks from the leaders of the Blue and White party, Prime Minister Binyamin Netanyahu on motzei Shabbos granted an interview to the media, using the opportunity to respond, to defend himself against harsh allegations.

Arriving at the News12 studio, PM Netanyahu took part in an interview for over thirty minutes, explaining, “They accuse me of treason, and this is most serious”, adding that he is suing them for libel.

In an interview last week, the Blue and White’s Moshe Ya’alon, a disgruntled former defense minister who resigned from the Netanyahu administration over the submarine purchase and other disagreements were quoted saying, “…the purchase of the submarines could amount to treason”.

Mr. Netanyahu’s attorneys have reportedly filed a libel suit and Ya’alon has already pointed out that he never mentioned Mr. Netanyahu’s name together with the word treason, despite it being clear who he was pointing a finger at.

After more than a decade in which Prime Minister Netanyahu refrained from sitting in television studios, and even the few cases in which he was interviewed, he did so from his home or office, he announced on a short notice that he would be interviewed at the News 12 studio a few hours before he made his way to Ben-Gurion International Airport for his planned trip to the United States and the White House.

The prime minister came to the studio after unprecedented attack in the past few days by senior members of the Blue and White party who accused him of dealing with stocks while he was chairman of the opposition. They also tried to tie the shares he held to the German shipyard company ThyssenKrupp, alleging the submarines purchased by him from the German company for the Israel Navy was done so to net him a handsome profit in stock earnings. The interview took about 35 minutes, compared with 18 minutes Benny Gantz received last week.

Prime Minister Netanyahu said: “I am on my way to Ben-Gurion Airport to go to a meeting with President Trump. I thought of passing through here because I must break the wave of lies that Ganz, Lapid, Bogi Ya’alon and Gabi Ashkenazi unashamedly distribute. What we have here is an attempt to divert attention from the fact that we have to choose whether to continue with the government that brought the country to its best, or go to a left-wing government with Yair Lapid, who relies on Meretz and the Arab parties that support terrorism.

“I want to shatter this entire blood libel, I bought shares in a company that has nothing to do with the submarines,” he said, adding: “When I entered the prime minister’s office, I received permission from the permits committee and the state comptroller and I said that I want to keep them [the shares], and they let me.”

“I bought the shares with my money, and the firm had amazing technological abilities. My cousin also realized there was a business opportunity and benefited. Certainly, I am not to be blamed for succeeding in business.”

“My cousin did not run the company and did nothing,” the prime minister made it clear, “he was on the board of directors of the submarines, but in a company that turns electrodes into a metal … The claim that I earned money on the submarines is a lie. I did not have a shekel invested and did not profit a shekel – this is the most terrible blood libel – Ganz, Ya’alon and Ashkenazi are plotting a plot because they know that I cannot tell one of the secrets of the State of Israel in the studio. The matter is now being examined by the attorney general.”

“The police said that Ya’alon is spreading gossip, that his testimony given to the police is different from what he says outside,” the prime minister replied. “I, of course, objected to the sale to Egypt during the period before A-Sisi. Why did I approve? Why didn’t I turn my nose to sell to Egypt? My reasons are purely security related.”

Netanyahu continued and took a stab at his rival. “I do not remember, over the years I had quite successful investments, I am proud that unlike Lapid and Gantz who went bankrupt, I understand that in general and business, I’m not bankrupt like Ganz and his company, I’m not Ashkenazi who got into trouble with oil, and I’m not Lapid who said he doesn’t understand anything about the economy.”

The prime minister was asked about the request to finance his legal expenses: “When the state invests several hundred thousand shekels, with at least dozens of investigators and lawyers, they invest a fortune, so they do not give me what they give to every public figure in Israel? Every public figure was given the opportunity to receive support and assistance in the face of tremendous effort. It is an inappropriate question,” Netanyahu said.

Regarding report that Iran hacked into Benny Gantz’s smartphone.

The prime minister also referred to the mobile phone breach of his rival Benny Gantz and said that the leak to the media did not come from him and that “there is no connection to the shares, no one has any connection to the shares. The fact is the matter was checked so why go there? Because they took it just as they did the Benny Gantz affair. The fact is that they started the chain of lies as if I had a connection with the submarines, they began to lie that I was suing them, they started the Iranians broke into Ganz’s phone.”

Among the questions asked, Mr. Netanyahu was questioned to determine if he would invite Lapid and Gantz into his coalition. He did not rule out such a possibility, stating, “I will establish a nationalist coalition with the current members. I do not see Gantz and Lapid joining. There is no room. First of all, for this to occur, there must be a victory and therefore I remind voters that this election will determine if there will be a left-wing government headed by Gantz who disguises as right-wing as if he is centrist light, which is a bluff.”

He also accused the presenter of the Karen Marciano and news commentator Amit Segal: “I do not ask for caresses like the one given to the second party, only [the ability] to complete the answers.”

Regarding the fact that three of the top four slots in Blue and White are held by former IDF chiefs of staff, Netanyahu explained “Ten former chiefs of staff won’t help if they do not go on the correct diplomatic tract. They are erred”. Explained Netanyahu, showing how they backed the nuclear agreement “while I challenged the entire international community including the US president, against these chiefs of staff, and I said the United States must exit the agreement and impose sanctions on Iran. I fought with them regarding the border fence that prevents infiltration from African nations.”

At the end of the interview, Netanyahu was questioned regarding Case 4000, Walla News: Was Erdan moved from the Communications Ministry to the Interior Ministry in response from complaints received from Walla News head Shaul Elovitz?

Mr. Netanyahu discarded the allegation, explaining he appointed Gideon Saar who resigned, and the nature of events is that Erdan was advanced. “total nonsense and lies…”

Blue and White responds:
Netanyahu is hysterical and once again changes his version of events. He avoids the difficult questions and continues to besmirch us. We have not received any answer as to how we earned NIS 16 million, and mainly – because there is no secret, because you just invented it, why did you permit the sale of advanced submarines to Egypt without the knowledge of the security establishment? The only thing that can be said to be that he has internalized what others have not yet absorbed: He is going to lose in the elections.”