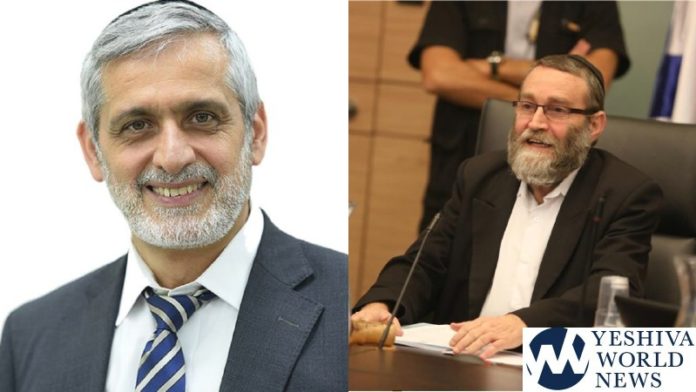 Just 13 days before the elections in Israel, Eli Yishai announced that his Yachad Party will be throwing their support behind the Ashkenazi Chareidi UTJ Party (Degel Hatorah / Agudah).

The move is stunning, as Eli Yishai served as the former leader of the Shas Party, under the guidance of Maran HaRav Ovadia Yosef. There were reports of trying to end the machlokes between Yishai and Aryeh Deri ahead of the election, but all failed. Recently, all polls showed Yishai’s Yachad Party not reaching enough to votes to get into the Knesset.

This development means that Yishai will have to remove his list before the elections, and that Yachad activists will campaign on behalf of UTJ.

In a statement to the media, Yishai said “after weeks of intensive work to strengthen the Yahad Party, we reached an achievement of more than 100,000 supporters who registered and expressed support in the Derech of Hagaon HaRav Meir Mazuz. Together, “and to this end I would like to thank all the dedicated activists who have only achieved this goal.

“As we promised, the Yahad movement will not endanger the Jewish right and character, certainly not in this critical election campaign.

“About ten days ago, contacts began to support United Torah Judaism through the mediation of Deputy Minister Meir Porush. After considering the data and examining the possibilities before us, we brought the details to the Rosh Yeshiva, Rabbi Meir Mazuz Shlita.

“After much consideration, Rav Mazuz decided that out of concern for the Torah world, out of responsibility for the success of the right-wing bloc, and the values ​​that accompany the Yachad movement, our supporters should be voting “Gimmel” in the upcoming election.”

Last month YWN reported that Gafne was urging Yishai to withdraw from the election, saying Yishai and Yachad are going to cause significant damage to the chareidim as they will not achieve sufficient votes to get into Knesset, and those votes will be lost, at the expense of additional seats for the chareidim.

Just two weeks ago, Netanyahu himself telephoned HaRav Meir Mazuz, the spiritual leader of the yachad party, to persuade the rabbi to instruct Eli Yishai to withdraw from the 21st Knesset election race to avoid wasting votes that would likely go to a right-wing party that will enter Knesset.