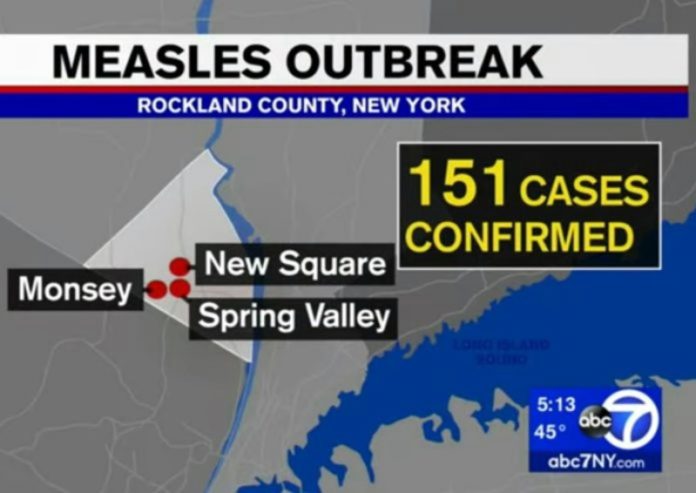 Rockland County declared a state of emergency Tuesday over a measles outbreak that has infected more than 150 people since last fall, hoping a ban against unvaccinated children in public places wakes their parents to the seriousness of the problem.

“It’s an attention grab, there’s no question about it,” Rockland County Executive Ed Day said at a news conference, noting that he didn’t believe such a drastic step has ever been tried in the U.S. before.

Day said he was taking the action in hopes of reversing a recent uptick in cases amid disturbing reports that health workers were encountering resistance when investigating cases. Rockland’s outbreak has most heavily affected Orthodox Jewish communities, in which vaccination rates tend to be lower.

Under the declaration, which lasts for at least 30 days, anyone under 18 who is not vaccinated against measles is barred from public gathering places, including shopping malls, civic centers, schools, restaurants and even houses of worship. Those in violation could be charged with a misdemeanor punishable by up to six months in jail.

Officials report they have had difficulty in getting information from the Orthodox-Jewish communities in Spring Valley, New Square and Monsey where many of cases of Measles have been confirmed:

But Day acknowledged that there will be no concerted enforcement effort and that the intent is not to arrest people but to emphasize the seriousness of the situation.

“There will not be law enforcement or deputy sheriffs asking for vaccination records. That is ridiculous,” Day said. “However, parents will be held accountable if they’re found to be in violation of this emergency declaration.”

The county is experiencing New York state’s longest measles outbreak since the disease was declared officially eliminated from the United States in 2000. Health officials say the best way to stop the disease’s spread is a vaccination rate in the community of 92 to 95 percent. Day said only 72.9 percent of people under 18 have been vaccinated against measles in Rockland County, which has more than 300,000 residents.

Civil rights attorney Michael Sussman, who represents the parents of 44 unvaccinated children who were barred from a Waldorf School in the county, said he would discuss a possible challenge to the emergency declaration in a meeting with his clients Tuesday night.

“It’s irrational,” Sussman said. “You’re punishing people who don’t have the illness rather than quarantining people who are sick.”

Sussman said a quarantine of measles patients and those close to them would quickly stop the disease’s spread.

This month, a federal judge, citing the “unprecedented measles outbreak,” denied the parents’ request to let unvaccinated children return to the Waldorf School. The lawsuit said the county’s order banning unvaccinated children from schools regardless of religious or medical exemptions violated their constitutional rights.

The outbreak began in the Rockland area when seven unvaccinated travelers diagnosed with measles entered the county last October. There have been 153 cases to date, Day said. In the early days of the outbreak, people were cooperating with health officials and getting children vaccinated, he said, but that has changed.

“Our health inspectors have been hung up on and told not to call again. They’ve been told, ‘We’re not discussing this, do not come back,’ when visiting the homes of infected individuals as part of their investigations,” Day said. “This type of response is unacceptable and frankly irresponsible.”

On the same day as the federal judge’s ruling on the school children, pediatric organizations expressed support for state legislation that would allow minors to get vaccinated without parental consent.

The state legislation’s Democratic sponsors said too many parents believe unsupported claims that vaccines are unsafe and cause autism or other conditions. Day echoed that message, noting celebrities who have spoken out against vaccines.

“If you’re going to People magazine and Jenny McCarthy and Robert De Niro for your medical advice, you need to re-evaluate your life,” he said.

The Centers for Disease Control and Prevention lists six measles outbreaks, defined as three or more cases, around the country in 2019, including Rockland County’s. The CDC said the outbreaks are linked to travelers who brought the disease back from other countries, such as Israel and Ukraine, where large measles outbreaks are occurring.

There have been 181 confirmed cases of measles in Brooklyn and Queens since October, most of them involving members of the Orthodox Jewish community, according to the CDC.

Day said the emergency order was timed with the upcoming religious holidays of Easter and Passover in mind.

“We want people to be able to celebrate,” he said. “We don’t want to see a repeat of how this outbreak started when we saw people gathered together and then fall ill last fall.”

Since the Rockland County measles outbreak began in early October 2018, Refuah Health Center has worked in-step with the Rockland County Health Department acting as a Point-of-Distribution for the MMR vaccine. Over the past five months Refuah has administered over 4,278 MMRs and altered service delivery to prevent unnecessary exposure by providing front door triage for all patients presenting with a fever and mobile medical services for patients under 6-months of age who were unable to receive an immunization. Additionally, Refuah has launched a multifaceted patient engagement and education campaign, strongly urging all patients and the local community to obtain all recommended vaccinations.

Refuah’s ongoing commitment to timely vaccinations continues. This week, prior to Executive Day’s State of Emergency declaration, Refuah hosted a workshop on vaccine hesitancy for its provider staff featuring nationally recognized expert, Dr. Robert Jacobson, M.D., F.A.A.P., Professor of Pediatrics at the Mayo Clinic. In light of the State of Emergency, Refuah thanks Dr. Jacobson and the Mayo Clinic for timely guidance and reaffirms its commitment to assisting individuals and families in obtaining all recommended vaccines and bringing the outbreak to an end.

Refuah urges all adults born after 1/1/1957 to check their vaccination records to see if they have received 2 measles or MMR vaccines. For children and individuals who are not immunized or for those who are unsure of their vaccination history, please contact your primary care provider. An MMR vaccine provides the most effective protection against the measles and could provide protection against this exposure or future exposures. With 2 doses, the MMR vaccine can be 97% effective in providing immunity. Refuah is offering vaccinations at all Rockland County locations. For more information, please visit RefuahHealth.org or call 1.845.354.9300.

Age groups for the confirmed measles cases in Rockland County

Measles is a highly contagious respiratory disease (in the lungs and breathing tubes) caused by a virus that is spread by direct contact with nasal or throat secretions of infected people (when a person infected with the measles virus breathes, coughs, or sneezes). Measles is one of the most contagious viruses on earth; one measles infected person can give the virus to 18 others. In fact, 90% of unvaccinated people exposed to the virus become infected. You can catch measles just by being in a room where a person with measles has been, up to 2 hours after that person is gone. And you can catch measles from an infected person even before they have a measles rash.

People are considered infectious from four days before to four days after the appearance of the rash.

Measles can be dangerous, especially for babies and young children. Others who are at high risk for complications if they get the measles include pregnant women who are not immune, as well as those who are immune-compromised or immunosuppressed (when your body can’t fight disease).

Some people may suffer from severe complications, such as pneumonia (infection of the lungs) and encephalitis (swelling of the brain). They may need to be hospitalized and could die. Here are some facts about complications in children and pregnant women:

Subacute sclerosing panencephalitis (SSPE) is a very rare, but fatal disease of the central nervous system that results from a measles virus infection acquired earlier in life. SSPE generally develops 7 to 10 years after a person has measles, even though the person seems to have fully recovered from the illness.