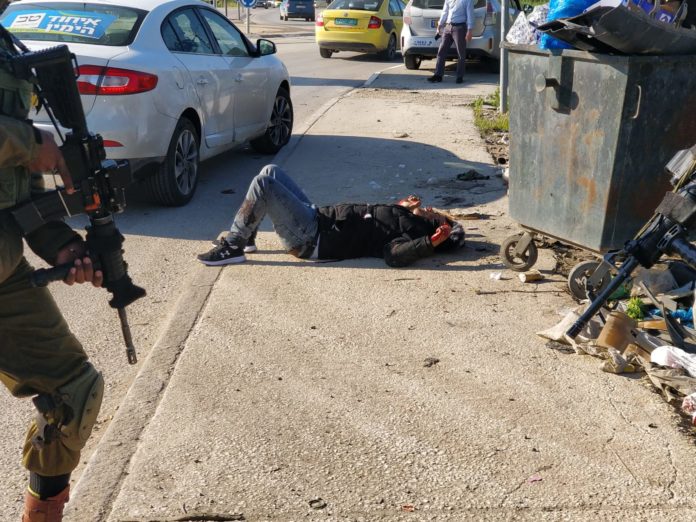 B’chasdei Hashem, yet another attempted stabbing attack was averted by the quick actions of a civilian driver, Yehoshua Sherman of Elon Moreh, who shot and critically wounded the terrorist, who died a short time later in Beilinson Hospital in Petach Tikvah.

The attempted attack occurred at about 8:40 AM Wednesday morning at Chawarah Junction, south of Shechem. The terrorist, armed with a knife, opened the door of a private vehicle passing through the area, trying to attack the passenger seated in the front of the car. The driver, Yehoshua, the father of the teenage girl in the passenger seat, pulled his pistol and fired at the terrorist, critically wounding him.

The attack occurred on Route 60, the primary north-south vehicular route in Shomron, as the residents of the ‘Gav HaHar’ communities including Har Bracha are required to drive thorough the Arab village of Chawarah to and from their homes.

“I was on my way to work at the party office and was driving from Elon Moreh towards Tapuah,” Sherman told TPS. “At Beytot Junction, a terrorist carrying a knife jumped on my car, and tried to open one of the doors. I got out, and while the terrorist was trying to go around the car to approach me, I shot and neutralized him, with the help of a Yitzhar resident who had been driving his truck behind me.”

“This is how we need to act – with fearless determination against our enemies. This incident illustrates the importance of finished the construction of the [alternate road] going around Hawara, which was agreed to by the Prime Minister. There is no reason why Israeli residents need to go through a hostile Arab population every morning and risk their lives and their children’s lives, especially now that the decision to build it has already been made. We need to accelerate the building of the alternate road immediately.”