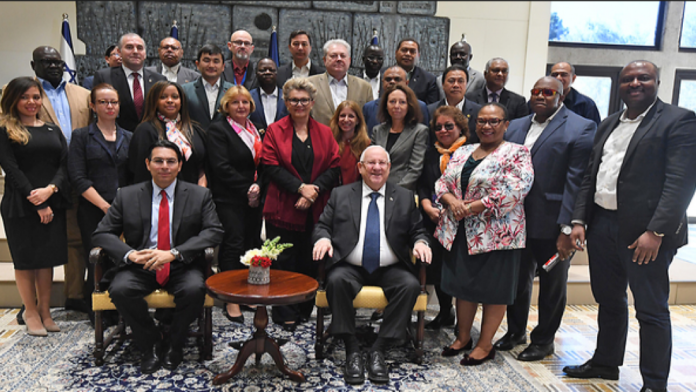 A delegation of United Nations ambassadors visited the City of David National Park on Monday morning, at the initiative of the Israeli ambassador to the United Nations, Ambassador Danny Danon.

The ambassadors were given the chance to learn about the latest archeological discoveries and the significance of ancient Jerusalem. The tour included a visit to the archeological excavations that are currently being conducted by Tel Aviv University and the Israel Antiquities Authority at the former Givati parking lot, where just a few weeks ago, a seal bearing the Biblical name “Natan Melech Servant of the King” was discovered.

“Neither the terror of missiles from Gaza into Israel or the political terror against Israel at the UN will succeed in erasing the eternal connection between the Jewish people and Jerusalem,” said Israel’s ambassador to the UN Danny Danon. “A visit to the City of David is integral to understanding Israel’s history and worldview and strengthens the resolve of ambassadors from around the world to stand alongside Israel.”

Doron Spielman, Vice President of the City of David added: “Once again the City of David was honored to host a delegation of United Nations ambassadors at the initiation of Ambassador Danon. We are confident that the lessons learnt from ancient Jerusalem will serve them well – as forces within the United Nations continue to deny the Jewish people’s connection to the heart of our homeland.”