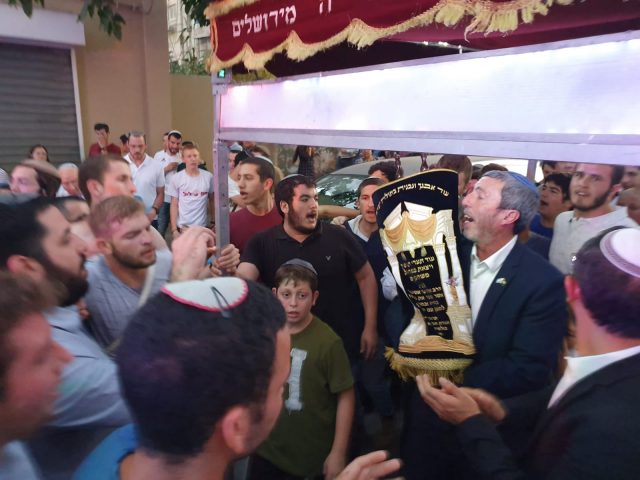 More than 2,000 people participated in an Hachnasas Sefer Torah on Sunday evening in the Neve Sha’anan neighborhood of Tel Aviv. The Torah was dedicated to the Oz V’Emunah Hesder Yeshiva and shul in the neighborhood in memory of the late Rabbi Achiad Ettinger HY”D from the town of Eli.

Rabbi Ettinger was brutally murdered at the Ariel junction terror attack in March while he attempted to neutralize the terrorist. Rabbi Ettinger had made it his life’s mission to strengthen the Jewish community in Tel Aviv and was on his way to the Yeshivah when he was killed. He was the Rosh Yeshivat Oz V’Emunah Hesder Yeshiva in the N’vei Sha’anan neighborhood in southern Tel Aviv, where the festive event was held on Sunday.

Since his death, his family has been working tirelessly to create a legacy for him that would strengthen the Yeshiva in the southern neighborhood of the city.

The Sefer Torah was donated by the community of Belucha Bronia in Russia and with the assistance of the head of the Binyamin Regional Council, Yisrael Gantz.

The celebration began in the Ettinger household with both the head of the Regional Council, Yisrael Gantz and Rabbi Kogan in attendance. There, the final letters of the Torah were written and the entourage departed towards Tel Aviv. The celebration in Neve Sha’anan invited residents from the local community and around Tel Aviv to join. Knesset members Yuli Edelstein, outgoing Minister Zev Elkin, MK Mai Golan, were all in attendance, as was city councilor Chaim Goren.

Tamar Ettinger, the former wife of Ahiad spoke at the ceremony at said: “We wish to thank Hashem for our meriting to bring this Sefer Torah to Yeshivat Oz V’Emunah. We want to thank the community of Balshia- Bronniya from Moscow for the donation of the Sefer Torah from the depths of our hearts. The dedication of this Sefer Torah is one more gift towards restoring a unique Jewish character to the neighborhood of Neve Sha’anan.”