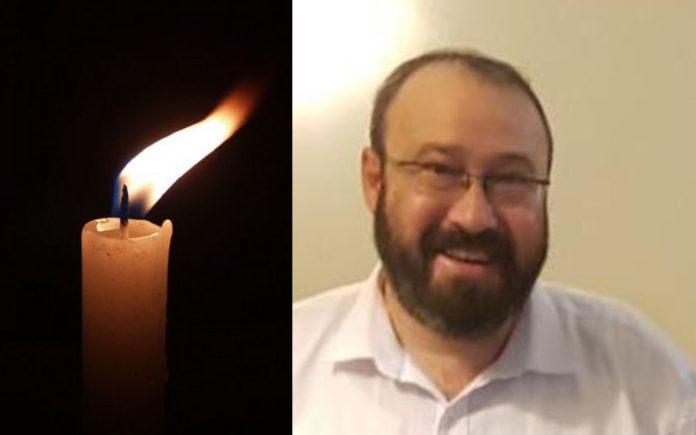 Yishuv Eli resident Rabbi Achiad Ettinger HY”D was niftar during the morning hours on Monday, after being critically wounded by the terrorist in the Ariel Junction attack some 24 hours earlier.

Rav Ettinger, 47, was a well-known educator in the Dati Leumi community, serving as dean of the Oz V’Emunah hesder yeshiva in the Neve Sha’anan neighborhood of south Tel Aviv.

He is survived by his Rebbitzen and 12 children, ranging in age from 1 to 21.

In a notice to the media on his Petira, the family thanks the staff of MDA and Beilinson Hospital who treated the Rav after he was injured, as well as all of Am Yisrael for the Tefilos.

It is now reported that Rav Ettinger’s final decision was to confront the terrorist. He had passed the scene and realized that a terrorist was attempting to carry out an attack. He was already a distance from the scene but turned his car around and approached the terrorist, firing four bullets in an attempt to neutralize him, until the terrorist’s bullets critically wounded him.

The Levaya began in Eli at 2:00PM, and passed the site of the murderous attack, Ariel Junction. Kvura was at the Segulah Cemetery in Petach Tikvah.

HEARTBREAKING – VIDEOS & PHOTOS: Over 1,000 #Israelis gathered in Yishuv Eli on Monday for the Levaya of Rav Achiad Ettinger H"YD, hours after he succumbed to wounds he sustained a day earlier in a terror attack at the nearby Ariel Junction. . Hespeidim were delivered by, among others, Education Minister Naftali Bennett, the Rav of the Eli, and several of the 47-year-old’s 12 children. . Many highlighted Rav Ettinger’s final decision to confront the terrorist after being shot, rather than fleeing the scene. . Held up by her newly widowed mother, one of Rav Ettinger’s older daughters, Efrat, said that she had learned at her father’s bedside that “you had quite a few students, who also called you ‘Dad’ and are not ready for you to stop raising them.” . “How could it be that someone who brought so much life into the world is no longer here to live with us,” she added, sobbing. . “The evil terrorist thought he was ending a life, but he had no idea how much life and power you left on this earth that we and the entire nation of Israel will use to grow and carry on.”

Also killed in the attack was IDF Lt. Gal Keidan HY”D, 19, from Beersheva. His levaya took place Monday, at 11:00AM in Beersheva.

Another IDF soldier critically wounded in the attack continues fighting for his life in a Beilinson Hospital ICU.

It was announced on Monday that a beis medrash has been established at the site of the attack; Mincha will be at 5:15PM followed by Maariv at 6:15PM. Shachris on Tuesday morning at 7:30AM.

Limud Torah will take place during the day.

Upon hearing of Rav Ettinger’s petira, President Reuven Rivlin responded, “Heart-breaking news of the death of Rabbi Achiad Ettinger ז”ל who was injured in yesterday’s terrible terrorist attack that also claimed the life of First Sergeant Gal Keidan. I was able to get to the hospital yesterday to be with his family who were davening for his recovery. I embraced them on behalf of all Israelis and was overwhelmed by their strength. Rabbi Ettinger’s life’s work will continue and be amongst us even after his passing, and the strength he gave his pupils and the community he led will continue to strengthen us through the enormous grief and sorrow.”

SICKENING: #Palestinian #animals handing out sweets in #Gaza to celebrate the news of a terror attack that killed an #Israeli father of 12, a 19-year-old #IDF soldier, and critically wounded another young soldier #israel #Palestinians #prayforIsrael

IDF troops accompanied by ISA (Israel Security Agency/Shin Bet) agents, and border police continued operating in PA (Palestinian Authority) villages in the IDF’s Ephraim district during the night as the manhunt continues for the terrorist who perpetrated the Ariel Junction attack.

The forces involved in the manhunt have already begun mapping out the home that the terrorist lived in ahead of demolishing it. Extensive searches were carried out in numerous PA villages. Simultaneously the intelligence community is working overtime to gather information towards learning of the whereabouts of the terrorist remains at large.

During the operation, eight suspects were taken into custody for their alleged involvement in acts of terror and/or violent confrontations with Israeli security forces.

It is reported that during these operations forces came under attack in the village of Jenin with two pipe bombs were hurled at them. B’chasdei Hashem there were no fatalities or injuries.

19-year-old #IDF Staff Sgt. Gal Keidan, who was killed in the Ariel Junction terror attack on Sunday, was a talented #musician. Video of Gal's final recital as a student of the Beer Sheva Conservatory was shared on social media after his death. . The director of the Conservatory, Jacob Reuven, called Gal a rare breed, a quiet boy who was extremely smart, and who like Reuven played the #mandolin, but chose to specialize in the #mandocello. The final performance was attended by his parents and his brother, Erez, who also studied at the Conservatory. #israel #terror

Professor Pierre Zinger, who is in director of the intensive care unit at Beilinson Hospital, explains the situation regarding the care for Rav Ettinger and the second wounded man who still fights for his life.