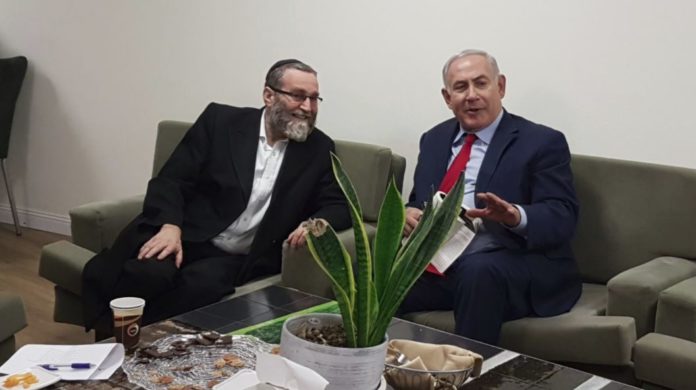 After several days during which Shas and Yahadut Hatorah did not participate in coalition negotiations, they returned to the negotiating table in the Knesset at noon, meeting with Likud party representatives.

The last meeting between the teams took place two weeks ago. On Monday, a week ago, Yahadut Hatorah leaders MK Moshe Gafne and Deputy Health Minister Yaakov Litzman met with Prime Minister Binyamin Netanyahu, who understood that the negotiations were delayed due to gaps in the issue of enlistment between the chareidim and Avigdor Lieberman, chairman of the Yisrael Beitenu party.

According to a Kikar Shabbos News report, the document dealing with IDF recruitment seems to have led to a measure of confusion among Yahadut Hatorah officials. The document was shown to Admorim and Roshei Yeshivos Shlita, who made their own amendments, resulting in a delay in the return to the negotiating table.

Avigdor Lieberman’s insistence on the draft document remaining ‘as is’, unwilling to entertain any changes, has complicated talks significantly and HaGaon HaRav Yitzchok Dovid Grossman, Chief Rabbi of Migdal HaEmek, met several times recently with Avigdor Lieberman to try and persuade him.

In recent days, the report adds, Rav Grossman has become a link between the Likud, Avigdor Lieberman and the chareidi parties. Senior figures in Yahadut Hatorah say that Rabbi Grossman’s phone was not resting, and in recent days he has been making a tremendous effort to reconcile the two sides.

A senior party official is quoted telling Kikar News that “Lieberman has softened somewhat and there is a breakthrough in the talks.”

Agudas Yisrael was furious at the return of the document, claiming that “they lied to the Admorim and presented them with only some of the data.”

In Degel Hatorah, the person who managed the complicated issue with MKs Moshe Gafne and Uri Maklev were the party’s rabbonim. Within the party, HaGaon HaRav Baruch Soloveitchik formulated his own amendments to the existing law, amendments that were considered by some parts of the party similar to those formulated at the time by the Gaon Rabbi Moshe Berezovsky (the son of the Admor of Slonim), who is considered the extreme of his positions. This was not transferred to the Likud, since the assessment was that in any case it would be disqualified by them.

Some of the Admorim, members of the Moetzas Gedolei HaTorah, among them the Admorim of Slonim, Seret Vishnitz, Boyan and Biala, examined the possibility of convening the Moetzes in an attempt to clarify the internal dispute between them regarding the final draft document.

Due to technical reasons, the meeting of the Moetzes did not take place in the end as the Gerrer Rebbe is in Beit Chilikiya, the Admor of Boyan is staying in Meron on Lag B’Omer and the Admor of Vishnitz is abroad.

Meanwhile, Shas’s negotiating teams convened on Monday at 3:00PM for a meeting with the Likud teams, and Shas aspires to sign together with Yahadut Hatorah to present uniform positions on issues of recruitment and Shmiras Shabbos.