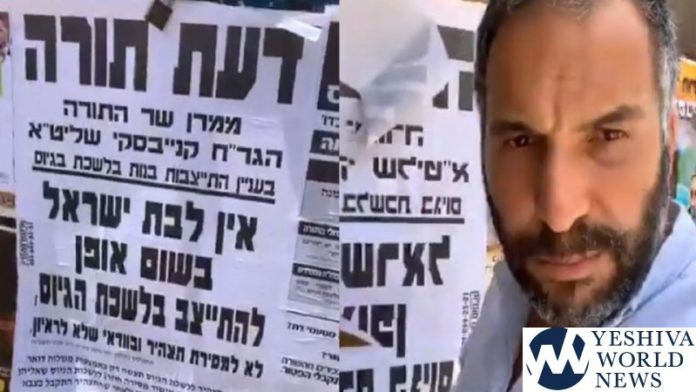 Once again, Tiveria Mayor Ron Kobi is in the news in connection with activities against the city’s chareidi tzibur.

It is reported on Tuesday that Kobi and his confidant Eli Elbaum arrived in the city’s chareidi Kiryat Shmuel neighborhood and began tearing down pashkavilim opposed to the recruitment of females into the IDF.

Kobi was elected on his anti-chareidi campaign, not seeking to hide his disdain for the frum tzibur, even daring to announce during his campaign that the chareidim in the city compose 22% of the population, and “they may not be permitted to exceed this number”. He also spreads his venomous lies, insisting the chareidim do not pay arnona property tax, hoping to incite the city’s population against this tzibur.

Tiveria City Hall is located adjacent to the chareidi neighborhood, and the notices in question were posted near Beit Knesset Ohr Torah of HaGaon HaRav David Auerbach. The mayor was fuming when he saw the pashkavilim and tore them down. Reports quoting him state that Kobi was saying “they only know how to take and take and take”.

He also is added saying, “It appears this will only stop when they receive summonses”, calling the hanging of the pashkavilim “chutzpah”.

Kikar Shabbos News quotes Kobi adding, “This incitement against the state, this reluctance to be part of the integration into the State of Israel, only to take and take and take – I see it sternly, but to make and publicize it wherever possible…?

“They took Tiveria, they wanted to turn it into a chareidi city, and it did not succeed, but they continue to try us and check us, these ads will be removed, those who posted the ads will pay fines.

“I do not intend to shut up and leave it like this.”