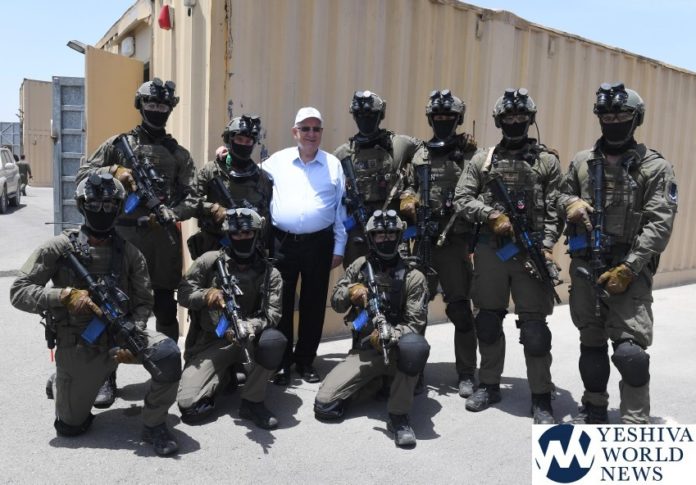 President Reuven Rivlin on Wednesday, visited the Shaldag unit escorted by IAF Commander Maj-Gen Amikam Norkin and the unit’s commander, Lt-Col Y. The president received a briefing on the unit’s operational activity from its commanders, then saw a display of weapons and finally viewed an exercise in which soldiers demonstrated the unit’s capabilities, including storming a building. At the end of his visit, the president spoke with the unit’s soldiers and commanders.

The president thanked the soldiers, saying “Every day, you are protecting the State of Israel, but the public knows little of what you do. On behalf of all Israelis, I thank you for your duty and your devotion.”

Speaking about the importance of compulsory service in the IDF, the president said “I do not see a situation in which the IDF will not be the people’s army, it is as simple as that. The Israel Defense Forces are our children, our grandchildren, and they are Israel’s security. Even when the face of war changes, the duty to serve is passed down from generation to generation of Israelis, and that will continue. Our operational targets may change, but the makeup of our army must not. It is a vital component of our strength, not empty words.”

IAF Commander Maj-Gen Amikam Norkin: “Shaldag is a special forces unit of the IAF that makes a great contribution to Israel’s security. At present, and in the current state of the Middle East which changes all the time, we understood we need to increase our capabilities and operational range. A special ground force as part of the IAF gives us a significant advantage and force multiplier in many missions.”