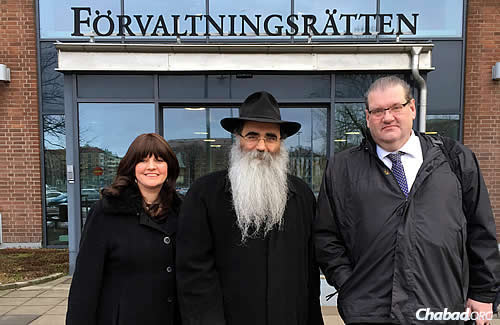 The Swedish Supreme Court rejected an appeal filed by Chabad Shluchim Rav Alexander and Leah Namdar, in the city of Gothenburg, Sweden. As a result, they must pay a fine of $67,000 for the ‘crime’ of their children studying Torah.

The story begins with Sweden’s passing of a law a few years ago prohibiting one from homeschooling one’s children. The law accommodates “special considerations” but these special circumstances excluded “safety and religion”. The Namdars point out the passage of the law was also contrary to the European Union law addressing human rights and religious freedom for all.

According to the law, the Namdars were not permitted to homeschool the children, but were compelled to send them to public school, resulting in a long legal battle, leading to the unprecedented ruling of the Swedish Supreme Court.

Their children, Rivka and Levi, are homeschooled by the parents, and not in the local public school as the law requires, relying on the clause in the law that one may homeschool if there are special circumstances.

The education system in Gothenburg petitioned the court, which fined them tens of thousands of euros. The rabbi and his wife appealed to the Supreme Court of the European country; but were rejected and are required to pay the huge sum by Friday, June 14, 2019. In addition, they were required to pay court costs of $30,000.

“The absurdity here cries out to the Heavens, because the city knows very well the excellent education and the maximum effort we give to our children, and in the past, we received much feedback about it,” says Rabbi Namdar. “It should be emphasized: Our education is not alien to the municipality because we are the parents of eleven children. Nine of them grew up and studied at home, and they went on to become marvelous individuals. They had additional private tutors for secular studies which costed us a fortune, and in all the tests that the Swedish Department of Education gave to us, all of them without exception succeeded and received compliments on their education and their knowledge. Our adult children work in Jewish education as leaders, teachers and rabbis in the United States, Iceland and Sweden. It should also be emphasized that my wife Leah, originally from London, is a certified educator. I myself have a rabbinical studies certificate that is considered a BA in the United States.”

The rav explains their problems began with the passing of the new law in 2011, as before then, their children were homeschooled as pointed out above.

Rabbi Namdar adds, “Their attempt to impose on us an education that contradicts our principles reminds us of stories about Jewish religious children in socialist Russia. And again: The reason our children do not go to school is not because they do not like to go, or because they work or because we are lazy. They learn very well and often, and they receive an intensive education. Their knowledge of mathematics, English, engineering, geography, etc. – is equivocal and sometimes even higher than that of ordinary children from a state school. Therefore, there is no reason why we should not be allowed to raise our children in the spirit of Judaism. In addition, we explain to them that the security situation here is uncomfortable for the Jews, especially for those who are visibly Jewish. It is important for me to mention that my sons are the only ones in the entire city who walk around in a street with an overt Jewish appearance. Only a month ago, a Jewish woman in Sweden was critically wounded by a Muslim immigrant who stabbed her. In addition, this past winter, Molotov cocktails were thrown at our shul.”

“In such a situation we cannot put our children at such risk and put them in a public school. The responses of municipal representatives on this issue were outrageous. They do not see any danger in that our children will learn with a hostile and even dangerous environment, and suggest that we simply pack ourselves up and move to another city or country, or that the children sit locked in a special room so Muslims cannot deal with them. This is deliberate and anti-Semitic abuse.”