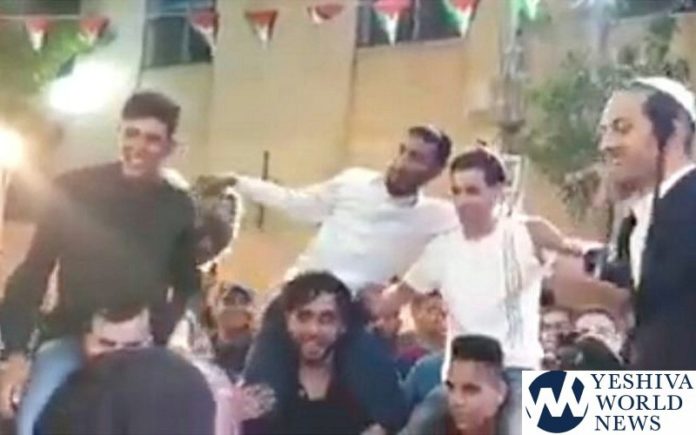 The head of the Dir Qadis Council, Radi Nasser, has been fired from his position in the Fatah party as well as being suspended from the Palestinian educational system after chareidim were seen at the wedding of his son, the daily Haaretz reports. A meeting is expected to follow, during which he will be officially ousted and the names of the chareidim who participated in the wedding will be handed over to Palestinian security officials.

The four were residents of nearby settlements, according to Palestinian media reports. Deir Kadis is about 10 kilometers (6 miles) northeast of Modiin. The video was released by the daughter of Nasser, in which the group of Chareidi men were seen taking part in the wedding, atop of the shoulders of participants of the wedding during the music and Arab dancing.

Some of the Palestinians at the wedding filmed the Jews, and the video clips quickly spread on Palestinian social media, sparking outrage, Haaretz reported.

The publication sparked a storm mainly on the Arab side, in light of the fact that these are unusual scenes that spread on the Palestinian street as “cooperation with the Zionist enemy.”

One of the chareidi participants at the wedding in a conversation with Kikar Shabbos News explained their participation in the wedding was due to an acquaintance with one of the mechanics in the village who invited them to take part in the village’s celebration. He explained that he and a friend attended, citing “they treated us with the utmost respect, and we felt like wanted guests”. He added the village leader made a point of coming over to welcome them personally.

Nasser explained he did not invite the chareidim to the wedding, but his explanation was not accepted, and the decision remains to oust him from the Fatah party, headed by PA (Palestinian Authority) Chairman Abbas.

It is pointed out that many chareidim from Modi’in Illit are in Dir Qadis daily, most to have vehicles repaired, despite warnings from the IDF that entering the village places one in danger.