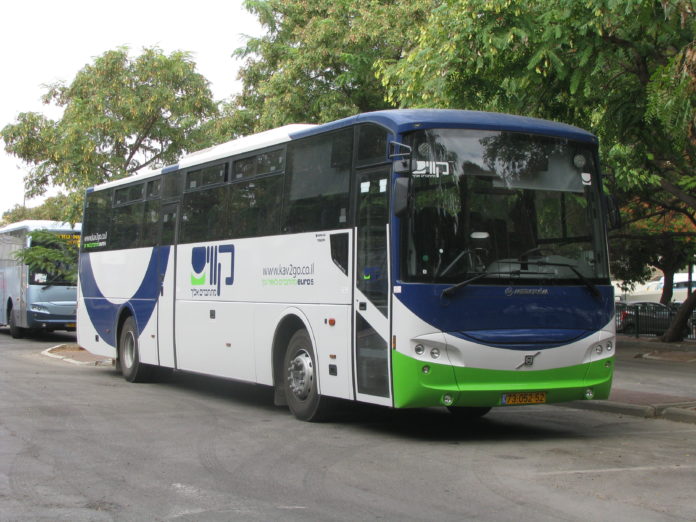 A nighttime drama near the Palestinian village in the territories: A driver who was placed on the wrong line and understood that he had to return to Jerusalem, decided to let the passengers off and leave them alone at the entrance to the village of Hussan. The result was not long in coming when one of the passengers recently sued the ‘Kavim’ Company for NIS 30,000, MyNet reports.

The unusual event took place about three weeks ago, when dozens of passengers on line 290 of the Kavim Company on their way to Betar Illit found themselves in an impossible situation, when the driver asked them to exit the bus near the Palestinian village.

The driver’s explanation was no less astonishing and outrageous: he understood during the trip that he had been placed on the wrong line and had to return to Jerusalem.

The tough questions:
• How was the driver on the wrong line?
• Why did he make them get off near Hussan and not at their original destination?
• Why didn’t he wait until another bus arrived?

What makes the incident even worse is the fact that it occurred at night and the passengers were left alone near the village at 11:40PM, until another vehicle arrived and picked them up. In this village, it should be noted, there was an attempt to lynch a Jew about five years ago, passenger Avraham Ronis explained in a statement filed last week with his wife, who recounts the traumatic experience they underwent.

“After we crossed the checkpoint and headed for Route 375, next to the back entrance of the village of Hussan, the driver stopped the bus and did not answer our questions … My wife was pregnant, and I saw that she was getting into a trauma. He understood that he must address us.

“Finally, the driver explained to us that he had made a mistake in the line and therefore did not continue to Betar Illit and asked us to get off at the entrance to Hussan and another driver would arrive”.

Despite the protests, the frightened passengers had no choice but, according to Ronis, they had to wait in the dark, late at night, close to the Arab village. Another bus arrived a few minutes later and took them to their destination.

The bus company reported that their response would be given in court.