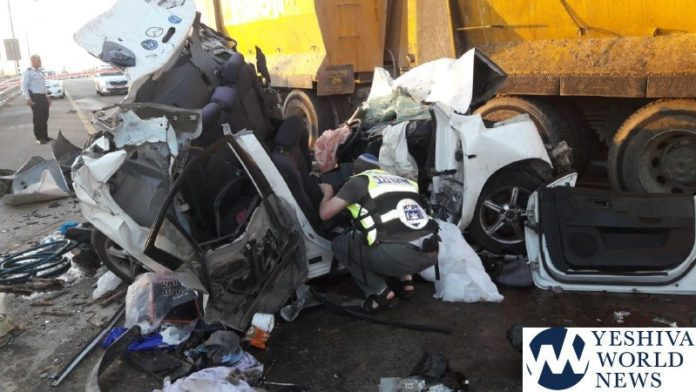 In a fatal vehicular accident at Shokat Junction in the Negev between two trucks, a bus and three private vehicles, one person was killed and one seriously injured. Five others are listed in moderate and light condition.

It happened on Monday at around 5:45PM.

A 50-year-old man was pronounced dead on the scene as firefighters worked to extricate him from the twisted remains of his vehicle. A chareidi man, 45, was treated by MDA and transported by MDA to the trauma unit of Soroka Medical Center in Be’er Sheva with massive traumatic injuries. In addition, two males in their 20s were in moderate condition and five others in light condition. All the victims were transported to Soroka.

Be’er Sheva District Deputy Fire Commander Ariel Revach reports “The accident was between two trucks, a bus, and three cars. There were two persons who had to be extricated from the trucks and another person trapped in a private vehicle. We worked to get them out using hydraulic extrication equipment.

MDA paramedic Moad Elamor: “The scene of the accident was a difficult one. Five vehicles were significantly damaged. We did a primary survey of the victims in the vehicles, and we treated nine persons. A 50-year-old man was trapped in a vehicle and he did not have a pulse. We had no choice but to pronounce him dead at the scene. A 45-year-old male sustained multi-system trauma, and we immediately began life-saving treatment. Two young victims, in their 20s, who were in a commercial vehicle, had abdominal injuries and were in moderate condition. Five other victims were in light condition. They were all treated and transported to a hospital.”

ZAKA Spokesman: The fatal accident occurred close 6:00PM on Route 31 near Shokat Junction. There was a 30-year-old fatality on the scene. Gad Kellerman, the ZAKA Operations Officer in the Negev added, “When I arrived on the scene, it was a difficult sight. A semitrailer was standing in the middle of the main road, and near it, there were a number of vehicles that were destroyed in the crash, striking the trailer portion of the truck…Firemen worked to rescue the 30-year-old who was unconscious, very badly wounded. MDA had to pronounce him dead on the scene. An additional victim, 45, was extricated from the twisted wreck in serious condition and transported to Soroka Hospital…”

The accident is under investigation by police.