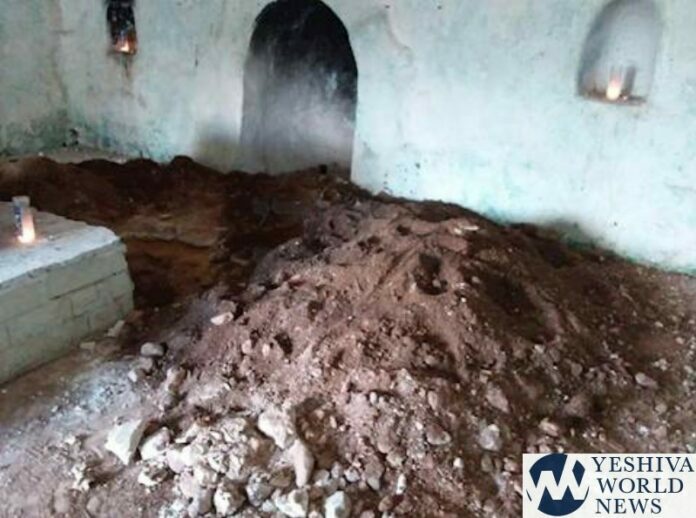 The Sephardi Chief Rabbi of Israel R’ Yitzchak Yosef sent a letter to the Minister of Internal Security Gilad Erdan (Likud) and Minister of Religious Services Yitzchak Vaknin (Shas) following the shocking reports of the destruction of the kevarim of Tanoyim and Shimon ben Yaakov Avinu in northern Israel.

“It’s been reported recently that holy sites which mark the historical burying places of Gedolim of previous generations – Choni HaMaagal, Shimon ben Yaakov and others – which have been standing for thousands of years, have been horribly desecrated,” R’ Yosef wrote. “Vandals dug into the kevarim and desecrated them. It’s evident that this a criminal trend of unknown elements who don’t intend to cease their actions.”

“I’ve turned to you with an urgent request that you immediately take action to fully investigate the matter, to bring those responsible to justice, and to immediately arrange supervision and protection [of the kevarim] from herein on to avoid further desecration of the kevarim of our forefathers. In addition to the kedushah [of the kevarim], they are historical assets of the entire Jewish people.”

R’ Yosef also implored the MKs to address Tiveria Mayor Ron Kobi’s threat to destroy the kever of Rochel, the wife of Rabbi Akiva, which is located in Tiveria. Kobi already submitted an order of demolition to the Tiveria police, requesting police protection to carry it out, shortly before Tuesday’s elections, perhaps in a desperate attempt to carry out one more provocation to boost his failed attempt to enter the 22nd Knesset.

Earlier, Kobi had claimed that not only is the wife of Rabbi Akiva not even buried there but there are no Jewish kevarim there – only Muslims are buried there. He added that “the place has turned into a means of extracting money… and there are illegal tzimmerim [guest houses] in the area. He also claimed that there is illegal construction taking place at the site. “It’s delusional but that’s how it is in the culture of [Shas chairman] Aryeh Deri…and it’s just a grave of an Arab woman.”

R’ Yosef continued in his letter to the MKs: “Furthermore – to our disgrace – I’m forced to appeal to you to request your intervention as well regarding the site of the kever of Rochel, the wife of R’ Akiva, which is in the holy city of Tiveria. A puzzling order of demolition has been issued by the mayor of Tiveria and I’ve been informed that he’s requesting the assistance of the police in carrying it out.”

“I’m requesting that you do everything in your power to prevent the mayor of Tiveria to actualize his scheme, chas v’shalom. It’s inconceivable that these holy sites are left without supervision, in effect allowing vandals to destroy them with no one to stop them. I thank you for urgent attention to the matter and Hashem should forgive the sins of His nation Yisrael.”

According to inquiries that Kikar HaShabbat carried out, the site of Rochel’s kever is on the list of Israel’s preserved sites, so Kobi is forbidden from destroying the site completely and can only destroy the guest houses.