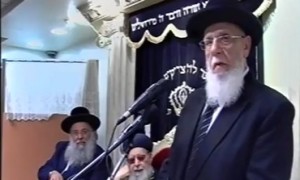 Once again Rosh Yeshiva Porat Yosef Rabbi Shalom Cohen Shlita, a member of Shas’ Moetzas Gedolei Hatorah is in the news. Rabbi Cohen has now stated that anyone who voted for the Bayit Yehudi party will go to Gehenom. It was the same Rav Cohen who recently compared the dati leumi tzibur with Amalek. The rosh yeshiva’s comments were clarified the following week by Maran HaGaon HaRav Ovadia Yosef Shlita.

That was followed by a meeting of chareidi and dati leumi rabbonim, arranged by Gershon Mesika, who felt the desperate need to lower the flames of dispute.

In an audio of a shiur delivered by the rav, Rabbi Cohen explains to talmidim that he received a letter from a dati leumi rav in the area who questioned how he could make such harsh remarks. The rav went on to explain that he is not interested in addressing the rav’s issue, asking rhetorically who he voted for in the elections. Rabbi Cohen stated that those who voted for Bayit Yehudi are heading for Gehenom.

This remark was made in passing as the rav focused on the issue of Bayit Yehudi’s decision to team with Yesh Atid, explaining Shai Piron is intent on destroying Yiddishkheit. “Piron wants to uproot the talmidei torah that the world rests upon and you, Bayit Yehudi, wish to be partner to this? Lapid promises them that hesder yeshivot will not be harmed” adds the rav.

“I don’t know who everyone voted for but who voted for them believes he is going to Olam Haba but is headed for Gehenom.”

Rabbi Cohen then made reference to the dati leumi rabbonim who signed a letter giving Bayit Yehudi chizuk and calling on the party to save the yeshivos. He told his talmidim one of the dati leumi rabbonim who davens locally and was among those who signed the letter gave a shiur in which he discussed the issues. He calls on that rav and others who are critical of the party’s behavior to stop remaining silent and take appropriate action – to shout at the “Bayit of Goyim” to leave the coalition.

Rabbi Cohen continues to explain that many see them, those who are critical of Bayit Yehudi and think they are one in the same. He stresses his words are only for Kovod Shomayim, and that those who voted for Bayit Yehudi are wretched, truly wretched, and others blame this all on Rav Kook, “poor Rav Kook” he concludes.

The rav closes by calling on dati leumi rabbonim to break the silence and protest and remove Bayit Yehudi from its coalition seats.