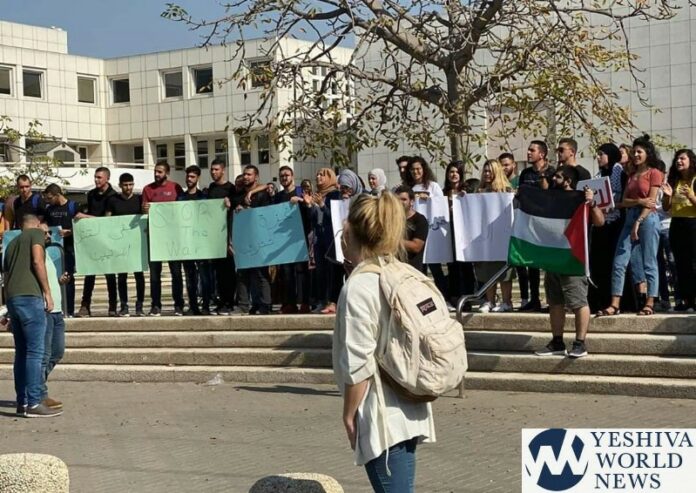 In response to the recent escalation in Gaza, dozens of Arab students at Tel Aviv University staged a protest on Thursday against Israel and the IDF.

“The blood of martyrs will flow; From Jaffa to Gaza, the ground will shake; Gaza is saying clearly: we don’t want to see Zionists,” were among the slogans chanted by the students who convened holding PLO flags at the university’s Entin Square.

A counter demonstration was held by activists from ‘Im Tirtzu’, who chanted pro-Israel slogans, waved Israeli flags, and accused the Arab students of being hypocrites and inciters.

Shai Rosengarten, coordinator of Im Tirtzu’s Tel-Aviv University branch who was present at the demonstration, said: “We are here supporting the residents of the south and our brave IDF soldiers who work night and day so these spoiled and hypocritical students can leisurely drink their espressos in Tel-Aviv University.”

“Rather than strengthening Israel and its war on terror, these students are joining with the terrorists and are inciting violence. If it’s so bad for them here, they are welcome to go to Gaza,” said Rosengarten.

“Im Tirtzu will continue to stand up for Israel and IDF soldiers against all those seeking to harm them,” concluded Rosengarten.