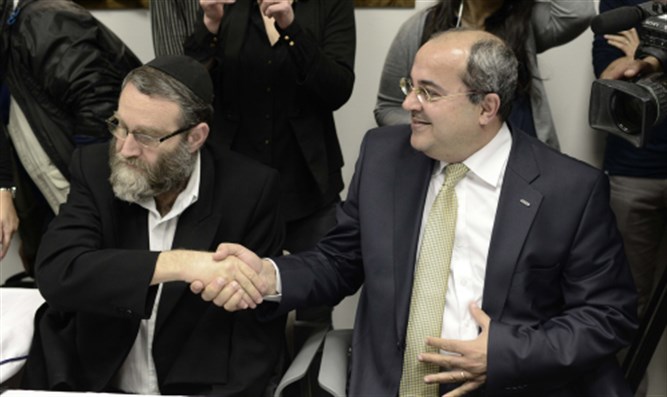 At the opening of a Knesset Finance Committee session on Wednesday morning, November 20, 2019, MK (Joint Arab List) Ahmed Tibi spoke, using the forum to thank the chairman of the committee, MK (Yahadut Hatorah) Moshe Gafne for his support and backing on Tuesday evening in his words regarding the members of the Joint Arab List party.

As the session was getting underway, Tibi decided to thank Gafne for his “honest and brave statements” in support of the Joint Arab List party, explaining “not every member of a bloc can be this brave.

Tibi added, “Throughout the years, “there has been fruitful collaboration with you and your listening to our needs has always been on the table. Your words were so important because there are leaders of other factions in the bloc who are still silent. They usually go to the Arab communities to ask for votes. You are not doing this, so your statement is true and pure. The president acted correctly when he mentioned your words.

“I am willing to hear difficult words from the president, because he speaks respectfully, for there is a way to express things when there are differences of opinion. We will be at the president at 11:45. If we have a part, even a small one, in that you are the chairman of this committee, I am proud of this.”

At the start of the committee session on Tuesday, Gafne began with words of support for the members of the Joint Arab List, who have come under attack of late, accused of “supporting terrorism”. Both Tibi and Gafne spoke out against this, with Gafne mentioning the delegitimization of them, stating, “From my perspective, the Arab tzibur for certain and the Arab lawmakers as well are legitimate.”

“I am saying what the many among us say. Politics is one thing and relations another. We will speak about this in the Yahadut Hatorah faction meeting as well,” Gafne concluded.